For the past four years we have been holding a truly unique competition right here in Alaska! Initially the idea was from my dad, Barry Matteson. When he came up with the idea of holding a pageant for a lady to be our very own Ms. Harley-Davidson, I was EXTREMELY skeptical! I imagined a bimbo contest with a bunch of trashy girls in bikinis that had absolutely no interest in riding motorcycles. Initially, this is probably what he had in mind too! Fortunately, after some discussion with a couple ladies in the pageant world, I was willing to give it a try, as long as it wasn’t a beauty contest with evening gowns and bikinis. This is a Harley-Davidson dealership in Alaska for cryin out loud!

Contestants from the first contest held in 2009

I worked with a lady I have known for a long time and she helped us develop the application process as well as the fee the participants would pay to play. The fee is $200 and ensures the contestants are serious about the competition and willing to put some skin in the game to ensure they show up for the events and are truly passionate about the competition.

Over the past few years, our wonderful Marketing Director, Sarah Coe has been helping to evolve the competition and really brand it.

You may wonder, why in the hell would we need a Ms. Harley-Davidson Alaska in the first place!? Good question! The primary purpose of this competition is to encourage more women to get involved in the sport of motorcycling and specifically Harley-Davidson. As a female Harley Dealer I am very focused on making sure women feel comfortable coming into the shops and getting engaged in the brand. This competition seeks out women who are not necessarily riders, but interested in the brand and willing to be a representative to other women on our behalf.

Since this is a unique Alaskan competition it is nothing like a pageant…I made sure of that! We generally have about 4 events that the ladies participate in. Each stage of the competition is judged by secret judges as well as points earned by people’s choice or performance. The first competition this year was the Trivia Contest. This is always fun, we give the girls a bunch of reading materials then have multiple choice questions for them to answer in a game show style setup.

The girls are in the hot seat during the trivia contest!

They earn points for the questions they answer correctly as well as points from the secret judges based on their qualities to be a good representative of our company. The next competition is the Chili Cook Off and Bavarian Costume Competition! Oh yes, this is as crazy as it sounds. Each of the contestants makes chili that is sampled and voted on by the public during out Biketoberfest Event. They also each create or buy a “Bavarian” costume (think St. Pauli Girl – with some HD influence). We have seen some serious creativity over the years from the girls in this competition.

The next event is a “sales” competition. Each of the girls works for me for a day during Small Business Saturday after Thanksgiving. They are awarded points for the merchandise they sell. We focus on clothing and collectibles as well as some accessories for motorcycles. 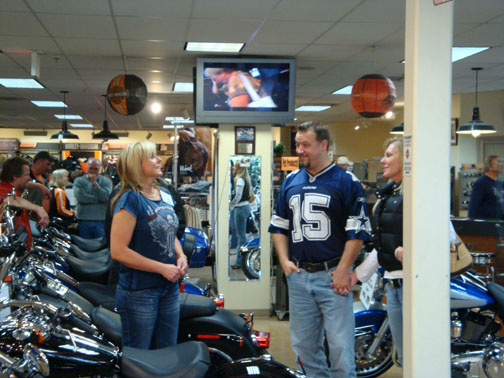 The final event is probably the most intimidating, a speech. This is an opportunity for the girls to talk about how they got into motorcycling and why they would make a great Ms. HD AK. 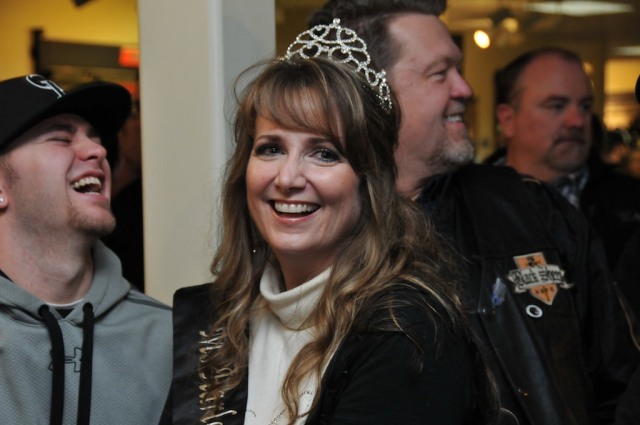 Although it is a serious competition, it is pretty fun and we have found that the girls usually end up being the best cheerleaders for each other.  If you would have told me we would have this much fun and get so many great women involved when we first started this I would probably have never believed you!

Our contestants for the title of Ms Harley-Davidson Alaska 2014!

Our next competition is October 19, 2013. Be sure to stop by and support the girls!