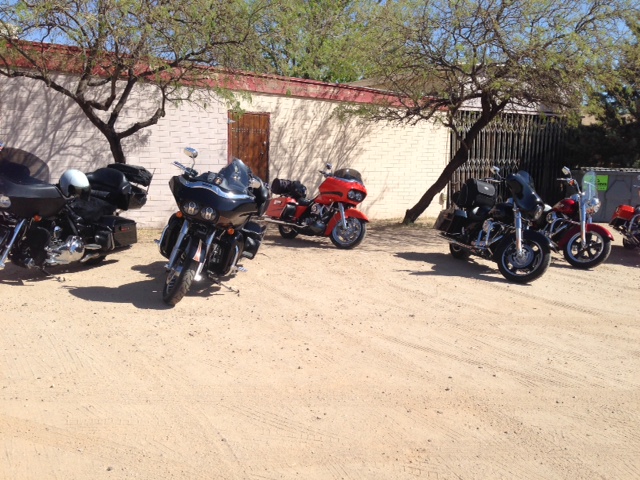 We got up early and headed to McDonalds off the freeway to meet up with the crew. It was most of the group that I went to Mexico with last November. Tom, Anne, Mark, Jan, Jerry, Carol and Barry. 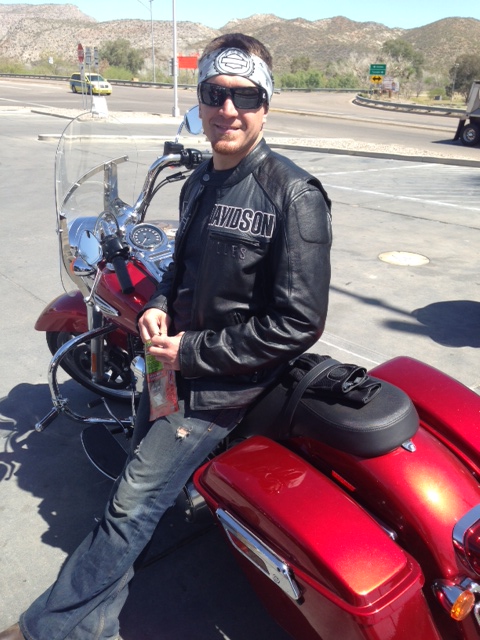 This time Jon was able to come with me and Jan was kind enough to loan him her bike. After some catching up and getting ready, we hit the road. 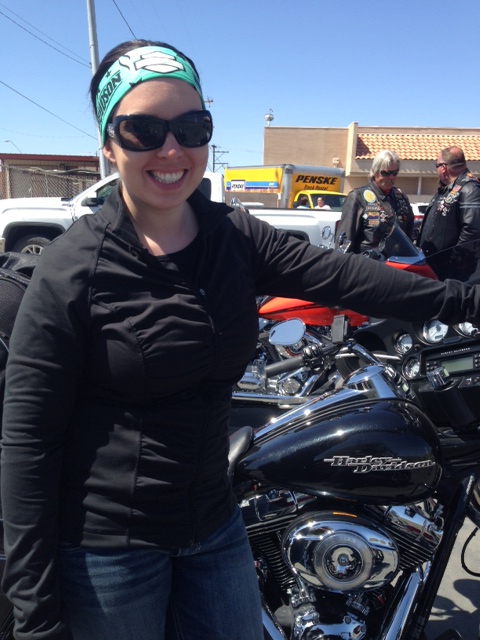 To be honest I am not really sure what route we took…I was just along for the ride! We got off the freeway and headed toward Oro. It was a beautiful scenic ride and not too fast so you could enjoy the view. We stopped in a small bar near Oracle. 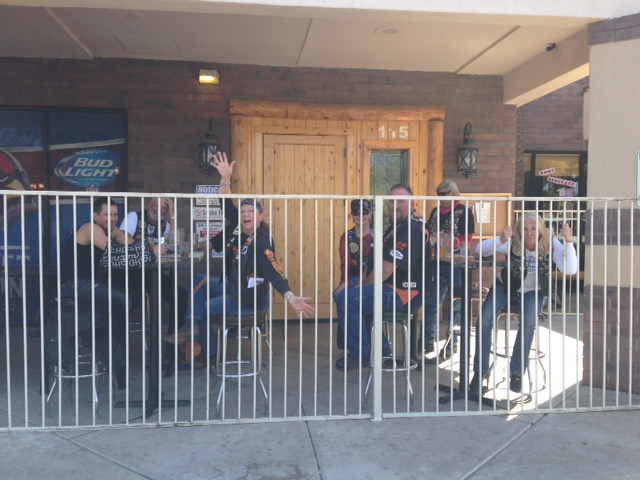 They were getting ready for a party there that night, so they all were busy planning the event, but we made ourselves at home and took over the entire outdoor seating area. It was pretty comical, the nine of us took up about 8 tables. 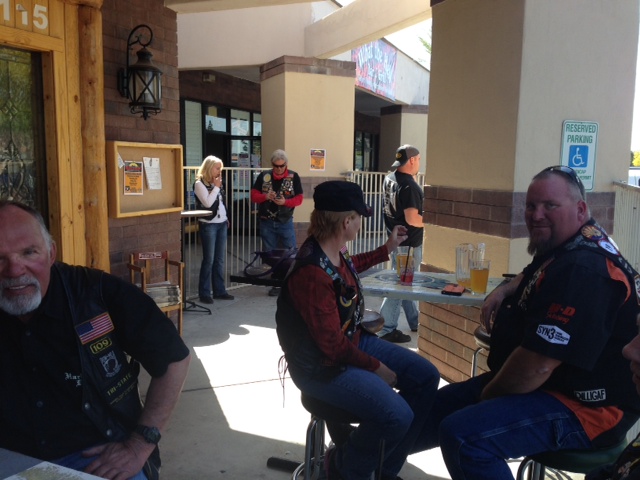 The waitress even commented on how we must not want to sit together! I guess only a few miles into the trip and we already needed space! 🙂 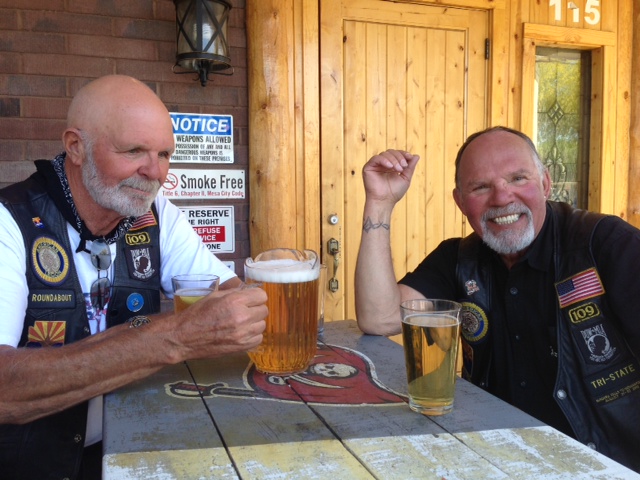 I had some business calls to take care of but we eventually gathered up and headed out. We Kept on the way and went through some beautiful curvy roads through the hills. It was a little bit cooler than I expected but still a beautiful ride. 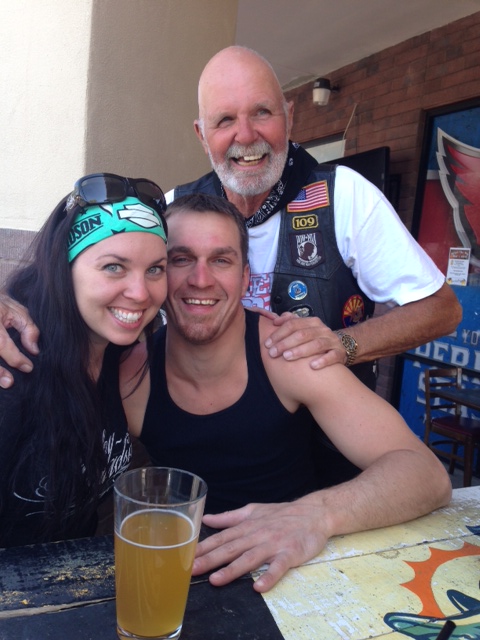 We ended up at Superstition HD which was a pretty cool dealership, and it used to be Chosa’s HD.  We then found our way to a bar/restaurant called “What the Hell Bar.” It took a bit of a circular ride to find the place, but we got there as we always do. There was hardly any staff working and we were all really hungry! Luckily our waitress showed up to work just in time! We all got some good food and relaxation before we hit the road again. Eventually we made it to Chester’s HD to pick up our passes for the party that night. Barry got us VIP passes from Vicki the GM there, which was awesome!After hanging out for a bit and doing a little shopping we headed to our hotel. We had enough time to relax and rest up for the party at Chester’s. They were having a Pre-Rally Backstage Biker Bash with a couple of country bands with a lot of vendors. 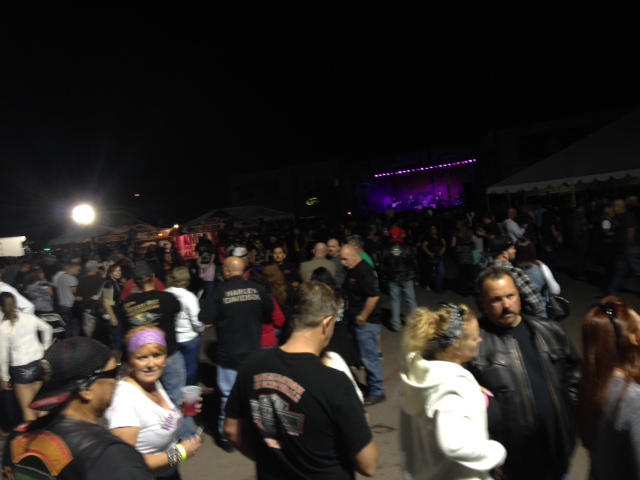 I couldn’t believe how much property they had just to throw a giant kick ass party! There was a huge stage on the back side of a building (I am not sure what the building was for) and then this huge paved lot. 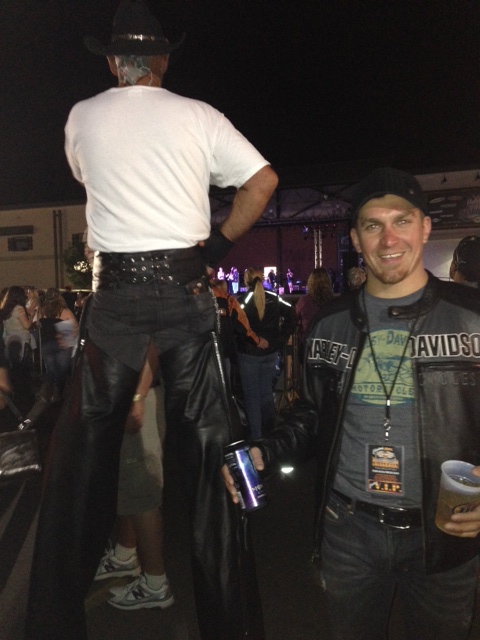 All the way around the outside of the lot were vendors for food, drinks, and misc biker stuff. Parmalee and Chelsea Bain were the two bands (haven’t heard of either of them myself, but the crowd sure seemed to know who they are!) I am not much of a country band fan, but Parmalee was more like a country rock band and they were very entertaining. With our VIP passes we were able to sit in a tent near the stage and had our own bar so there was never a long line. There were a few vendors there, the most “fun” was a food truck called the “Pig Rig.” 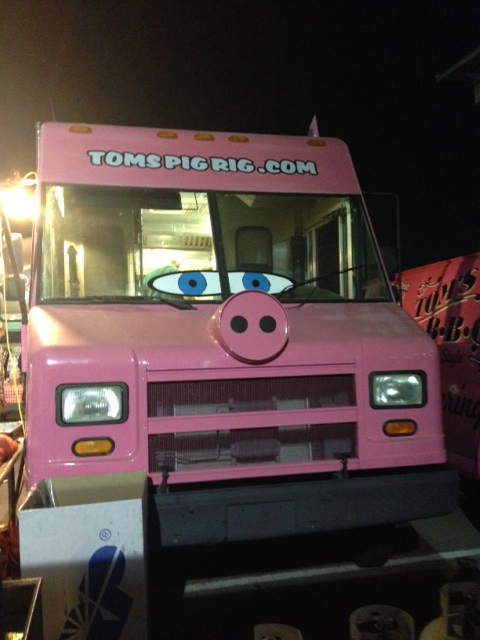 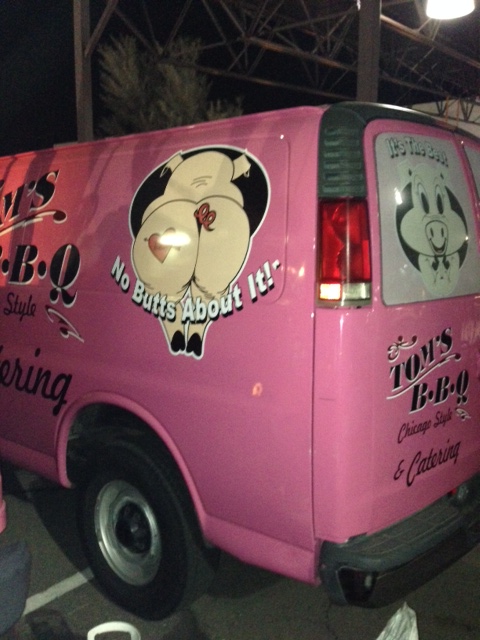 It was a pork truck that had the craziest homemade potato chip nachos that were at least 5 pounds of food! They had pulled pork and who knows what else piled high on top of these potato chips. I got some shrimp tacos from the food truck next to the pig place, the food was ok but the employees literally had a melt down and stopped taking orders after me! I am not sure if they ever got their act together, but it was pretty sad that they couldn’t handle the crowd of hungry bikers.

The music ended around 9:15pm and the crowd all started to clear out pretty quickly. We headed out and made it back to the hotel. The kids (meaning everyone else) wanted to go to the bar so we all walked over to the “Dirty Dog” I guess I should have assumed by the name that it wasn’t a real classy place… It was really crowded and really loud. Jon and I lasted about 10 minutes of standing in the crowded bar before we decided to head out. I went back in to tell the crew we were heading back to the hotel, just in time to see why the bar was so popular…mostly naked chicks doing acrobats and dancing on the bar! So, the two youngest kids couldn’t keep up with the rest of the crew! Oh well, off to bed to rest up for another fun day!