It was a bit cooler this morning when I got loaded up and ready for the day. I actually used all my gear, gloves, leather bandana, leather jacket and sweater! To head out I got to ride north on 64 into the Grand Canyon park, like I did last night. It was a beautiful morning riding through the park, not cloud in the sky and hardly any cars on the road. As I made my way around the south eastern side of the canyon I would get little glimpses of it through the clearings. It was magnificent, and enormous. I was able to get a few more peaks as I rounded the base of it. It really is weird how it just stops. There is this vast canyon and then it just ends. The park is all pretty wooded and I saw a sign for mountain lion crossing! I didn’t see any, but I did get to see a really pretty fox that ran out in front of me, with enough distance I wasn’t panicked, but got a good look. 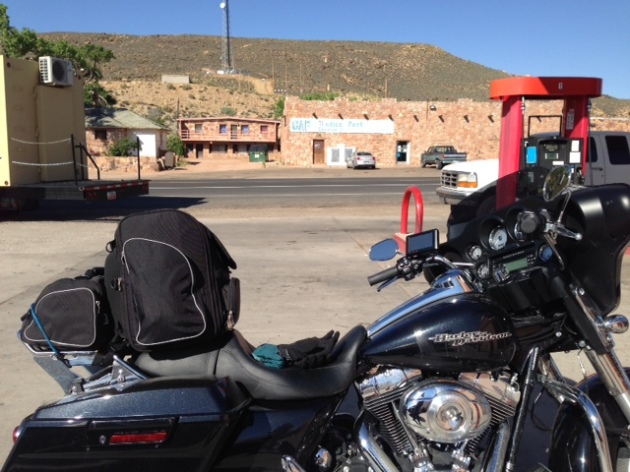 Today was pretty varied in both terrain and temperature. The route took me along 64 until it ended at 89. This road was fabulous as well. The terrain went from the woods to a variety of rock formations and a really cool canyon that was a straight drop off from a flat surface. It was as if the wide plain had been ripped apart. The elevation changed dramatically throughout the day and with it the temperature. I had a lot of miles to go, so I didn’t stop much even though the scenery was amazing! I decided I would stop at a place called “Cliff Dwellers Lodge,” which was in my GPS and on my route. On the way there I passed through Marble Canyon. It was amazing! Pretty much the entire way up 89 there were large rock walls lining the east of the road. It was beautiful and pretty cool how the various layers in the walls were different colors, like the Grand Canyon. Along the way, the scenery was still awesome and as I approached Cliff Dwellers there was an area that was filled with large boulders sitting on top of smaller rock pillars. It was pretty cool, I wish I would have stopped and gotten a picture. I stopped at the restaurant and Cliff Dwellers, that is pretty much all that was there. When I pulled in I cringed at the soft rock and dirt parking area…sometimes my bike is a little heavy to move around in gravel. I parked and headed over to the restaurant. There was outdoor seating which was perfect. Although the air felt cool while I rode, it was pretty hot and sunny sitting still! I got a great breakfast of 2 eggs, hash browns and toast for $7. The waiter/owner was also really friendly, just a simple guy who was enjoying his day. I ate my eggs and browns (no need for the toast!) and was  getting ready to leave when he pointed out this really cool lizard right by my table! I got to take a picture and watch him crawl around the patio for a bit while I paid my bill. The old man, clearly a local, sitting in the corner told me it was a collared lizard and then shared with me about these weird lizards that are as big as his forearm and hiss like a snake. I recall hearing about these before, but he was quick to add that the Indians used to corner them in holes in the rocks and stab them with a stick and eat them! Yummy! I paid the bill and hit the road…well not quite because sure as shit, I couldn’t back my bike up in the loose dirt and gravel. It was a few minutes but I finally got her turned around and rode out of there! 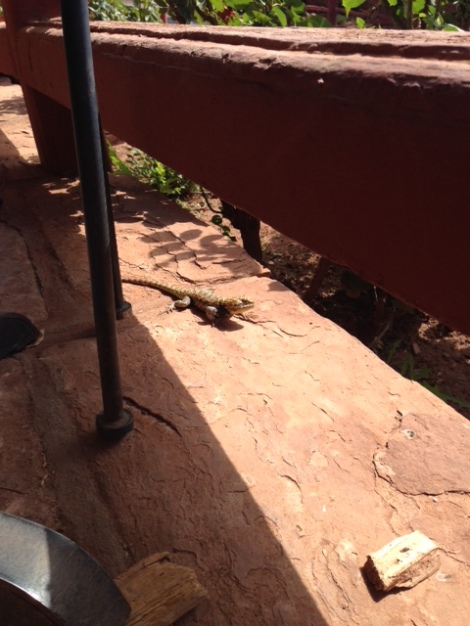 The road seemed long after this although still pretty scenery, I was climbing elevation again and started to get cold quick. I stopped at Jacob Lake to gas up and put on more layers. Oh, speaking of gas, apparently a bunch of gas stations put “See Cashier” on the screen when you try to pay outside if they don’t have enough business inside. This has happened to me twice and the clerk told me it is random but does it before you even try to run your card! Anyhow, at Jacob Lake I got some gas and added layers as I watched the overachieving gas station guy offer to wash windows and help all the drivers he could. He even taught them how to get the most clean windshield. This is cross roads for the Grand Canyon North Rim entrance, so I imagine he can make some decent tips by being so kind. After I got my gear on I headed out on 89A, and as luck would have it I was very near the decline into more desert terrain and got warm rather quickly. 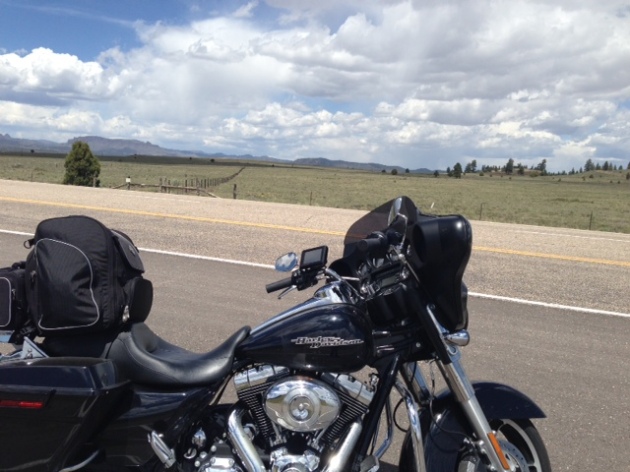 Near Cliff Dwellers I noticed my GPS was an hour ahead of my bike…apparently AZ doesn’t do the whole daylight savings thing and Utah does. So, I lost an hour which put me a little behind my schedule. I made it to Kanab which is the boarder town and right after I got through town, I got stuck in line for road construction. It was HOT while I waited but was a good chance to stretch my legs. I decided to take the scenic route, but I honestly underestimated the distance. I continued on 89 until it intersected with 12 which was a scenic byway that goes through all the parks. Almost immediately after getting on 12 you ride through what is almost like a wall  of red rock. It literally runs perpendicular to the road and has a gap down the middle that your ride through. You immediately are in “Red Canyon” and the red rocks are super cool, unfortunately I was feeling time crunched and didn’t stop. I am sure you can google it for an idea…the coolest part was the “tunnels” they cut through the rock for the road!

From this point forward it was literally canyons, rocks, and forrest for the entire journey. I realized quickly that this was a much longer route than I had originally planned and decided that I wouldn’t be making it to Provo. Around Escalante there was a crazy run heading West with runners all along the road and a bike race (or something like that) heading east. The road has absolutely no shoulder and there are runners everywhere! It was hot right here and I felt bad for the folks huffing and puffing along. It was basically a climb the whole way for them since they were going up to Escalante and I was heading down. The road was curvy and in some spots you were literally riding on the ridge of the mountain with dropping slopes on either side. The bikes started appearing further east toward Boulder. They were part of some campaign for sharing the road with bicyclists. There was a lot of highway patrol support, who luckily didn’t pull me over when I blasted around one who started to pull over and changed his mind! The whole route was very curvy and kept me on my toes, which can also be exhausting. I was realizing that my plan to hit Provo was definitely out of the question and I was starting to feel anxious about finding a destination for the night.

I was getting tired and cold, so I stopped at the interchange from 12 to 24. There was a little coffee shop, and there were also giant thunderstorms immediately in front of me. So far I had managed to skirt around most of the rain, with only a few drops along the way. This however was pretty daunting. I figured I was gonna ride through it now or in a few minutes and I could only hop that they would move further away while I got some coffee. I imagine I am quite a sight at this point. I was pretty dazed and confused, with itchy dry eyes and fatigue from the road. The young guy at the coffee shop with gauged ears was quiet and pretty much stared at me blankly. He was nice enough to bring me my coffee though, as I stood there looking at my map trying to figure out where I was going to stop for the night. I was at about 400 miles for the day already. 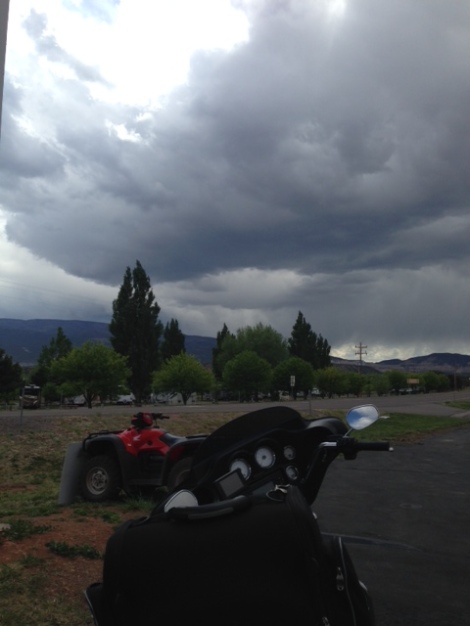 I searched Google and looked at my maps, and decided I would have to call it quits at Richfield. There were a couple hotels here so it had to be a decent spot to stop, plus it was right off the freeway. While I was planning my route, the thunder storm was passing right by lightning and all. As soon as it started to sprinkle I was getting my gear on and loading up. Fortunately, the storm was splitting down the middle and it looked like I would only have to ride through a little bit of rain! I hit the road and about 1 mile down the road the rain started getting stronger then all of a sudden HOLY HAIL!!! I almost had to laugh as I ducked behind my fairing and my forehead got a brain freeze. I have only ridden through hail once before and that was with a full-face helmet! It stung but it was quickly passed through and after a few more miles most of the rain had stopped and it w as only wet roads. I made it safely into Richfield around 5:40 and got a room at the Best Western. Down the road, within walking distance was a local restaurant…if it has a cowboy riding a bucking horse on the roof it must be good right?!

They all look at me like I am an alien…I guess a girl alone with a sun burnt nose and upper lip (I still don’t know how this happens…apparently my lips are so big they stick out as far as my nose) is a novelty around here! I am going to hit the hay early tonight, but only after I get someone to talk to me…it is a bit desolate riding alone! I have no clue what my destination for tomorrow will be…that is half the fun!

1 Response to Dia’s Journey from Tucson to Spokane- DAY 3 Tusayan to Richfield, UT