This is how we do it in Alaska…

Trike riding in Alaska during the winter is not for the fashion conscious. You look like the “Michelin Man” with all your layers to stay warm, but it is probably the one of the best adventures I have had with my Harley lifestyle. 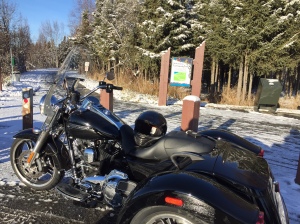 Our new Sales Manager at House of Harley, had this wild idea to do a trike ride on Halloween. From this seed we developed the Trick or Treat Ride to be a poker run to benefit The Downtown Soup Kitchen with a $10 buy in and prizes from House of Harley for the winner. I was in the mood for adventure so I told Sal he and I could go on the trike ride on a couple of used trikes we had. I figured I would borrow the beautiful used Dyna trike with the Frankenstein conversion that we just took in on trade. Well as things go, the trike I was going to ride was sold! Good for business bad for me. So, I thought well I guess I can take the new Freewheeler that is on the floor for a “demo” ride. To be 100% honest I was super nervous for this ride since I had never really ridden a trike more than around the parking lot and then add in the snow! Sarah, our Marketing Director decided to also join on a borrowed trike. I pretty much had no room to be nervous since she is pretty far along in her pregnancy and was hardcore enough to go on the ride!

After a super short practice ride I was already grinning ear to ear. So our small group of bad ass trike riders gathered up and pulled our first card for the poker ride. We headed out and in about forty-five seconds I knew I was hooked. I literally don’t think I have smiled so much in one ride in a long time. Trike riding is completely different than riding two wheels. Don’t get me wrong I won’t give up my awesome two wheeled bikes but trikes open up a whole new type of riding. It is a lot easier than I thought to switch from two wheels to three wheels. I was worried I would forget to keep my feet up at stops and have a hard time turning without the ability to “lean” in the corners. Our buddy Ben aka “Jamaican” gave Sarah and I some tips along the way on how to turn and where to ride in the lane. Our poker run was not super long or spread out but was so much fun. We had a small group, Dan on another Freewheeler, Ben on his Bengineered “big wheel,” Nich on his Dyna trike, Mike on his Sidecar Ultra, Ed on his Triglide Ultra, Sarah on the Sportster trike and myself on another Freewheeler. As we rode through town we had people waving and cheering us on. We even had a guy stop and take a selfie with us as he walked through the crosswalk. Our ride took us from HOH to the Northway Mall, then from there to the cemetery downtown (it was Halloween after all), then to Earthquake park and finally back to HOH for the final card.

After we arrived at the shop most of the group hung out and drank some coffee to warm up. I managed to do about 20 minutes of work and knew I had to go ride some more. We had such a beautiful day. So, I talked Jamaican and Nich into continuing our ride a little further. I was hooked.

Monday morning several roads were closed and we had something close to 60 accidents in Anchorage because of the snow we had and the icy roads. I stayed home for the morning and did some yoga. I had an appointment to get my hair done at 12:30 and didn’t want to miss that appointment (I have to maintain my bangs) so I jumped in my car and headed down the hill. I was only planning on getting my hair done then heading back home. However, after I made it down from hillside I saw the roads really weren’t that bad. The main ones were pretty much melted. I saw that my riding gear was still in the car from Saturday and decided I wanted to take that trike out again. The Freewheeler handles amazing. I can’t believe how well it corners and how much fun it is to ride. So I called my buddy Ben and asked him to go triking. Of course he was still in bed…at 1:30 in the afternoon, so after he got ready he met up with at the Peanut Farm. We grabbed some lunch and headed to the east side of town. Just a week ago Nich was saying how there are not enough people to ride trikes with, so I guess when he saw Ben and I posting our adventures he decided to join. He met up with us at Cabin Tavern on the east side. By the time we left there it was getting dark and a little icier, the Freewheeler handed great! We headed to downtown then back to the shop. Besides getting coated with slush from my fellow riders I had a blast! Now I am looking forward to getting some more heated gear and extending my Alaska riding season to year round. 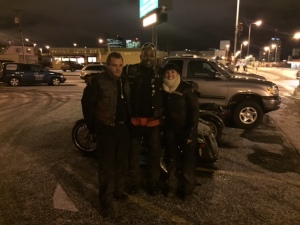 2 Responses to This is how we do it in Alaska…