This morning Sarah and I woke to a few of our Rogue Riders talking about how cold it was outside our window. But before I get too far into today, as promised, I have to fill you in on the rest of last night. After dinner with a bunch of our group at the hotel restaurant, Sarah and I went back to the room to get the blog posted and photos shared etc.

Once I was done with my part, I walked back over to the bar to flirt with the two cute boys working there. I believe it was Ryan and Josh, one was from New Zealand and a little closer to my age while the other one was from the area on only 18 and about to join the Canadian Military. Sarah joined me for a cup of coffee while I finished my wine, and we plotted to do the only fun thing you can do in Haines Junction…climb the ugly sculpture at the cross roads in town. Obviously, I was not going to climb up there, both bum knee and lack of upper body strength, so I got to hold the camera and get some great video and photos of Sarah. The best part of our mission is that the Mounty’s are literally across the street. Sarah…such a rebel. Watching her get down was more entertaining than climbing up, but she made it unscathed and we didn’t get busted by the Mounty’s. 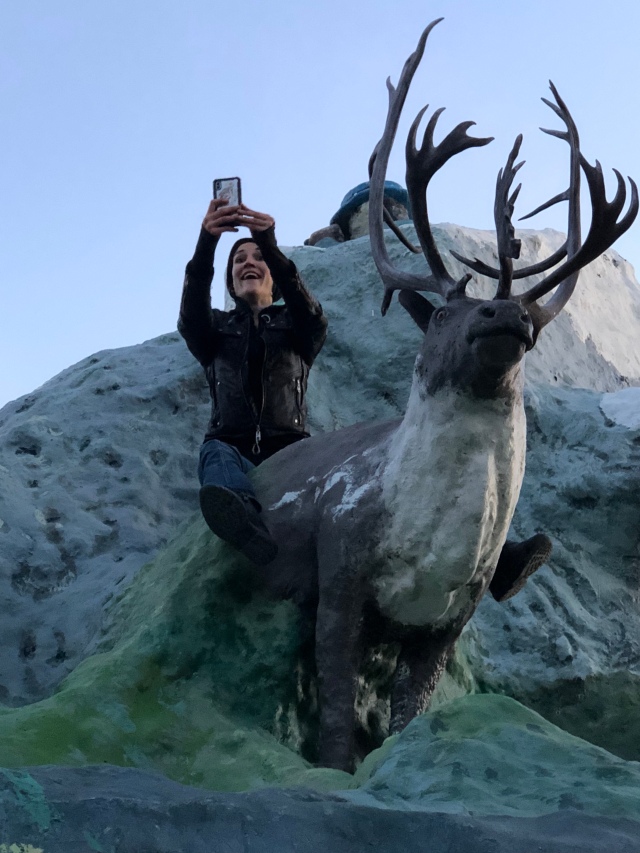 So, back to this morning…Sarah and I had discussed our plans with Barry and Jim last night but we still were not sure what we were going to do. A bunch of the group was planning on riding to Whitehorse to get breakfast, which was what my first choice was, but Barry and Jim wanted to eat in Haines Junction. So, while we were packing and getting ready, it was decided that we would walk…yep walk…to the bakery up the street. Yay for a bum knee! I woke up not feeling very good, so I assumed it was something I ate. Rather than add more food to the mix, I opted for a San Pellegrino and some probiotics. Sarah and Jim got some light food and Barry got a smoothie. Sarah and I also were able to finally get some espresso. While we were eating and chatting Julie, Chris, Gary, Mike, Glenda and John all showed up. They wandered in and realized there wasn’t giant breakfast options so they headed back out after asking the waitress where a large greasy spoon type of place was. 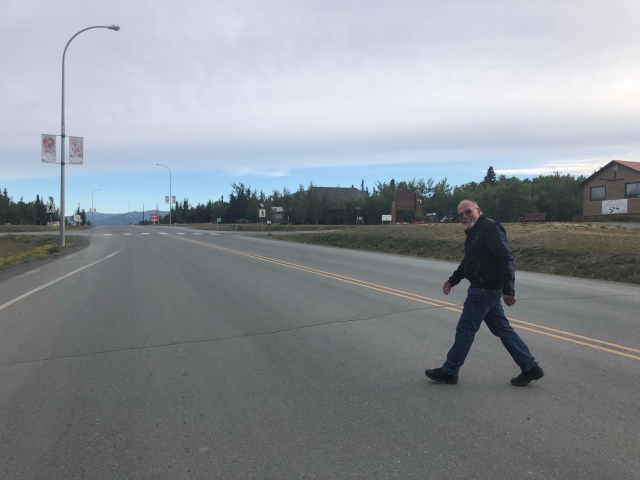 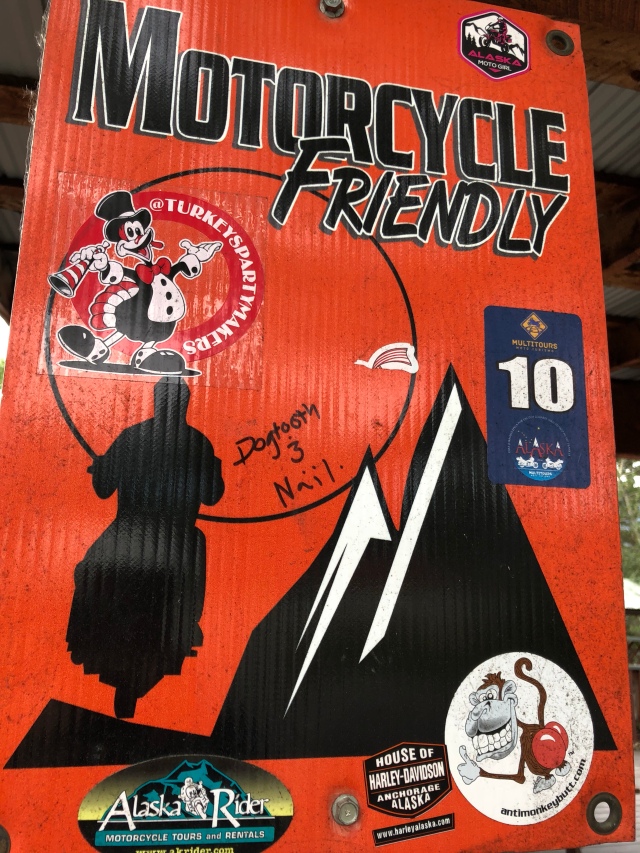 It was still in the 30’s as we got out bikes loaded the rest of the way up and got ready to hit the road. We were the last ones in our group to leave the hotel. 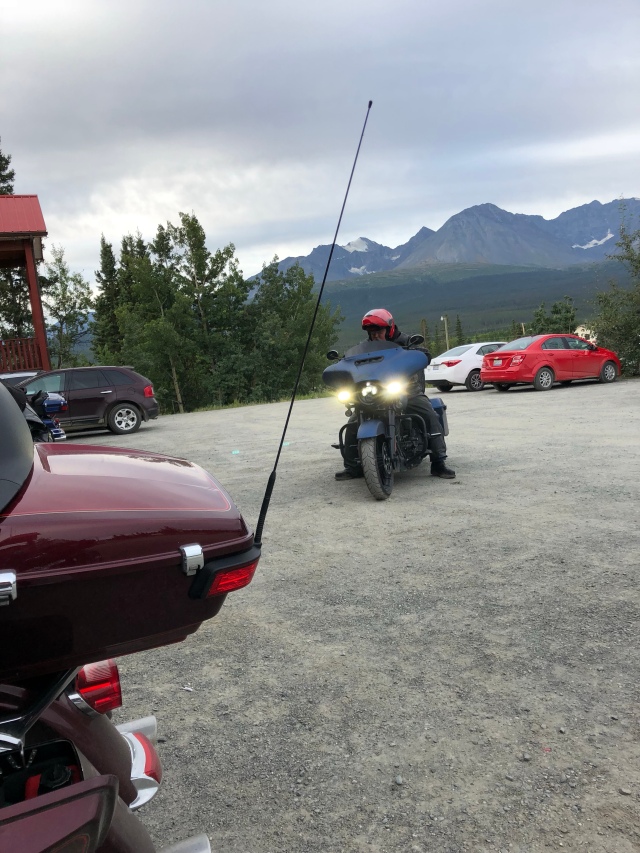 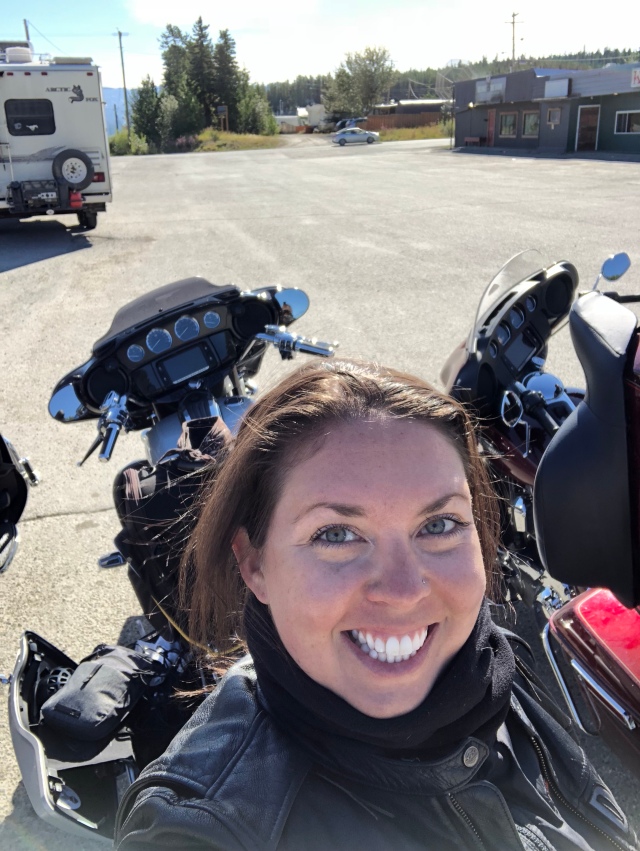 When we pulled onto the road, I thought we were going to top off with gas, so I didn’t hook up any of my heated gear. Of course, I was mistaken so I spent the first 6 miles trying to hook up my shit while riding. I finally got both gloves plugged into the coat and the coat plugged into the bike so I did a little fist pump in the air in case Sarah was aware of my struggle as she saw me swerving all over the road.

Between Haines Junction and Whitehorse, the road was pretty open and straight. Some big curves but nothing too twisty. At one point we saw that group from the bakery at a truck stop diner, so they clearly got their big greasy breakfast. While we were cruising along I saw a large female moose start to run up toward the road. I wasn’t sure if Jim saw it, but it looked like she might dart behind him and in front of me so I started to slow down. As soon as Sarah and I got closer with our super loud music she turned tail and ran fast back toward the woods she came from. It really is impressive how big and powerful moose are.

As the day kept going my stomach continued to get worse. I was feeling really nauseous and my stomach started to cramp all over. I figured it must have been something I ate and I couldn’t really do anything about it so we kept on. When we got to Whitehorse we stopped and filled up with gas. I sent a message t my friend Lauren whom I met in Ushuaia, Patagonia when I was in Argentina this spring. We happened to be on the same hike with a small group of about 6 of us and immediately hit it off. I had told her I would be riding through her town on this trip and we had hoped to meet up. Unfortunately we were not able to this time around, but we did get a couple messages back and forth. Maybe we will meet up in another adventurous country like Africa, since we both have it on our radar for 2019. 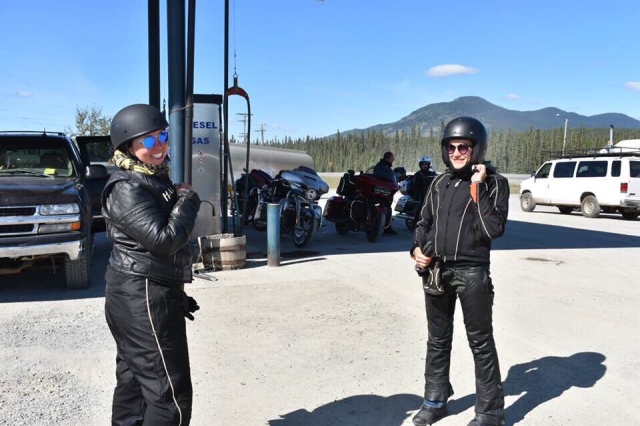 While we were hanging out at the gas station in Whitehorse, Sarah asked Jim why we had been only going 60 the entire day and getting passed by cars. He explained that it was the speed limit and he didn’t want a ticket. Barry, Sarah and I wanted to got about 70 so Jim opted to stay behind us and I would lead. As we headed out, there was a lot of traffic but we finally got out in the wilderness and of course the speed limit was over 70 or 100 kph so Jim ended up keeping up with us anyway. At one point the cars in front of us all stopped so I signaled for everyone to slow, and there in front of us was a doe with her two fawns (I think that is what they are called…aka mommy deer and 2 babies). They darted into he woods like the moose, probably from our loud music.

We approached Teslin and I saw the first gas station so I pulled in. As I parked my bike I looked up and I’ll be damned there was our token Canadian Dewey! He had planned on meeting our group in Teslin and I guess I picked the only option. Eventually our entire group got there so we all hung out while they ate ice cream and chatted about the past few days and upcoming adventures. My stomach was in pretty rough shape so I laid on a bench trying to stretch out my stomach. Sarah got some work done and we all enjoyed the beautiful sun. The weather was perfect again today. It was clear and sunny the whole way, just a little cool in the air which is always refreshing. In a few places I could smell smoke, which I assume will only get worse as we get closer to all the fires in B.C. Eventually, everyone was done with their ice cream and catching up, and Dewey wanted to get pictures of all of us coming across the grated bridge. If you are not familiar with these bridges they are an old school metal bridge that feels like your bikes is going to wash out while you ride down it. Dewey crouched at the other end and got a bunch of great photos of all of us riding across. The semi’s started to stack up so I think he may have missed a few people since the truckers were getting impatient with him blocking the bridge. We pulled into a rest area just up the road and waited for him to catch back up. After sitting in the uphill dirt parking lot for awhile we got the train moving. Dewey, Chris, Julie and Gary all took off like bats out of hell so a larger gap developed between John and Glenda Pokrandt and the first pack. I slowed way down so I could create some more distance between all of us so I could set my cruise and not have to yoyo with everyone. 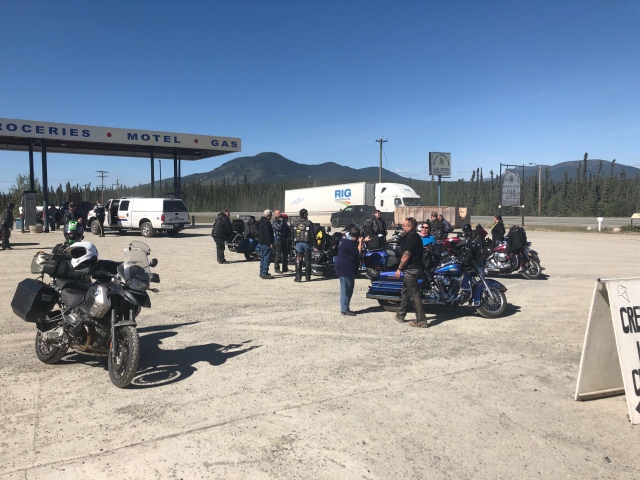 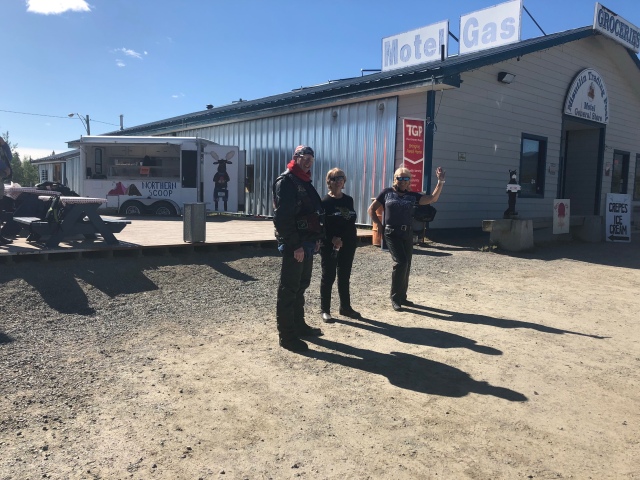 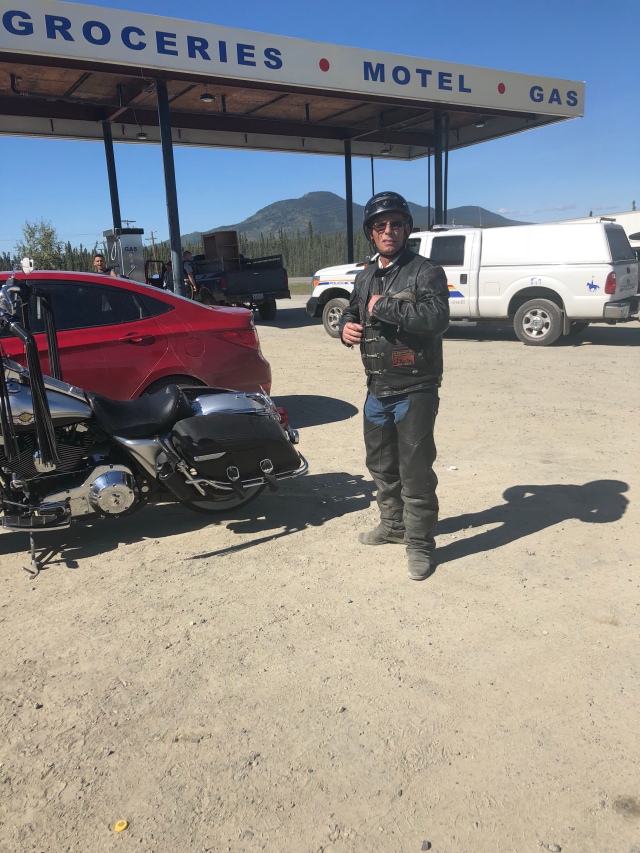 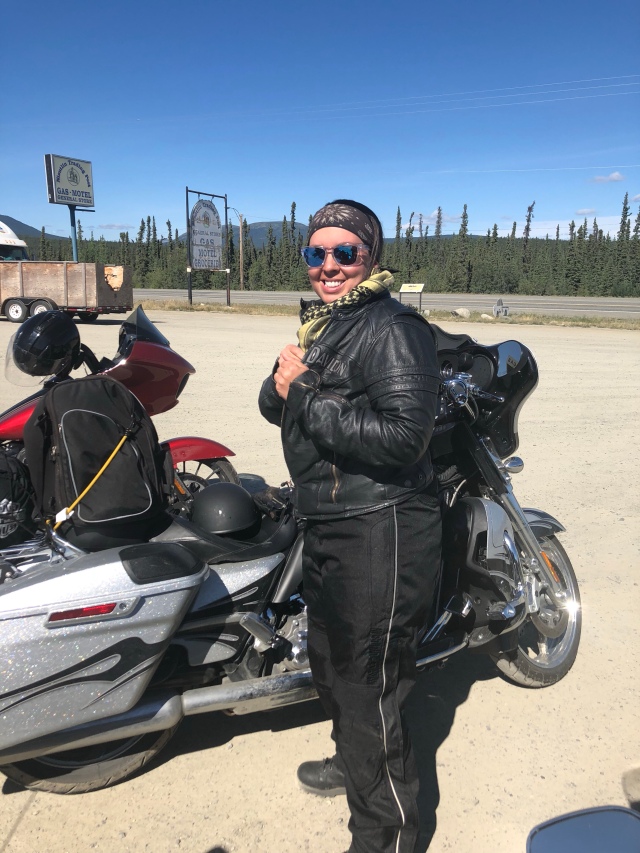 We continued at this pace until we got to Rancheria, which is a small gas station with a restaurant and bar. Last time we came through here, this is where Dewey had met us with us. At this point I was feeling pretty sick so I wandered over to a bench to try and relax. It sounded like everyone was having fun climbing on the log motorcycles and things they had throughout the yard. Eventually we all mounted back on the bikes and headed to Watson Lake and the Sign Post Forrest. Diana Chase had a really cool metal Rogue Rider sign made for us, so after some group photos they found a perfect spot to hang it on one of the new posts that had been put up for more signs. If you have never stopped at the Sign Forest it is really a spectacle and worth taking some time to wander around and see all the amazing signs and license plates from all over the world. 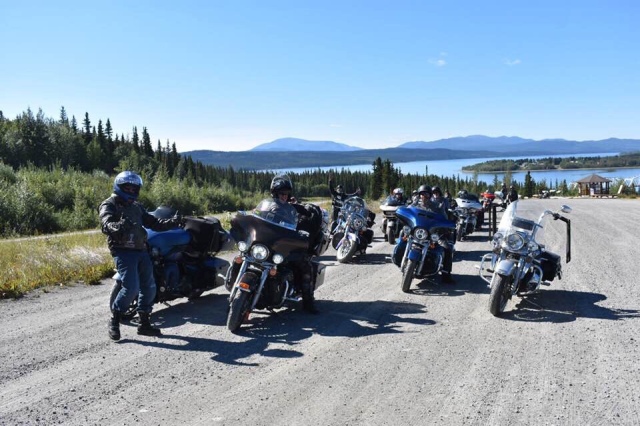 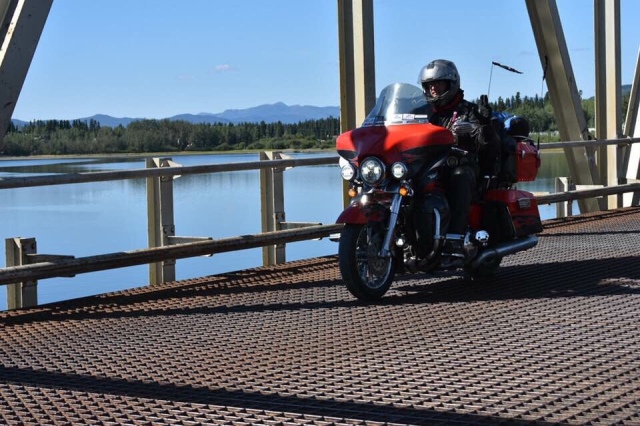 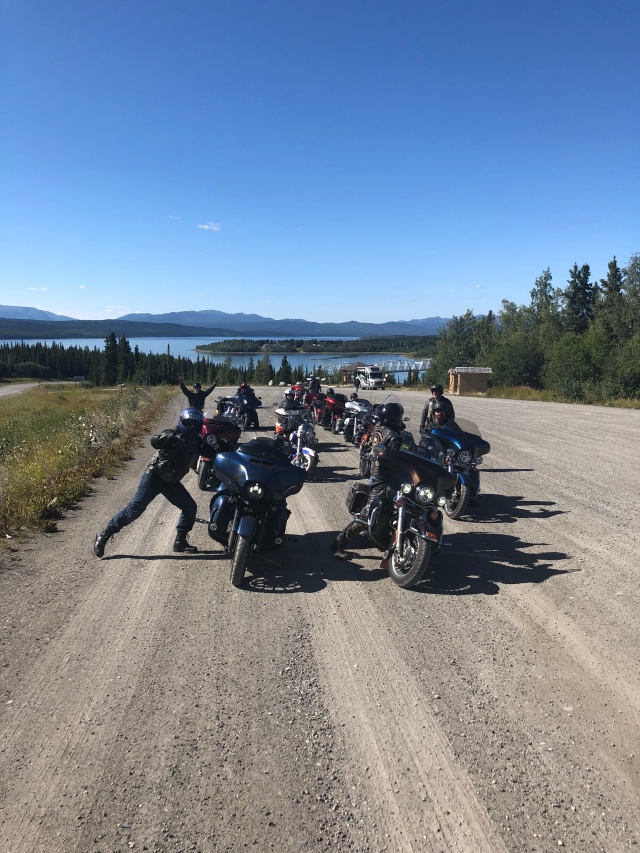 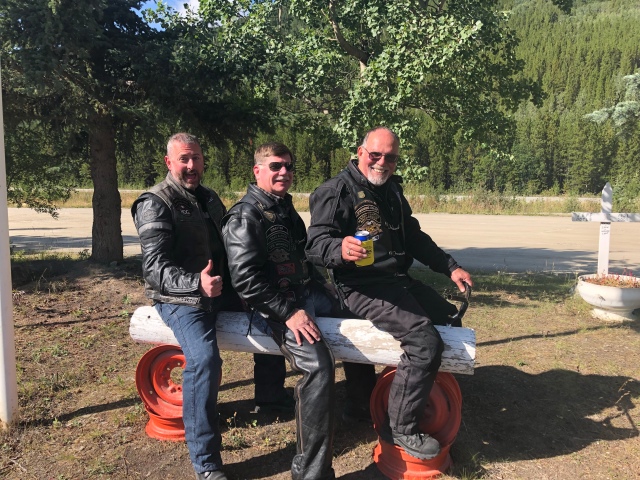 After the Sign Forest we all headed to our respective hotels or camping spots and got our stuff unloaded. 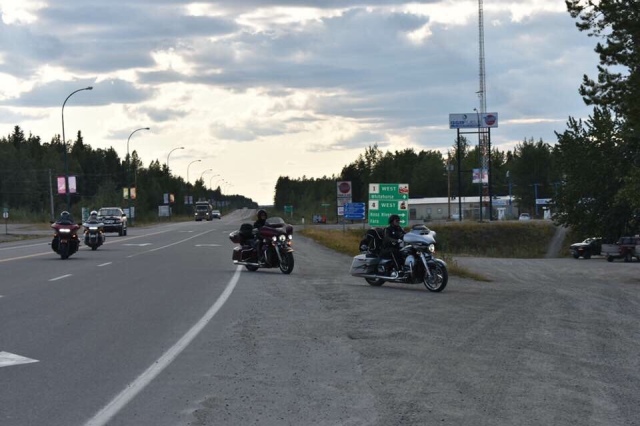 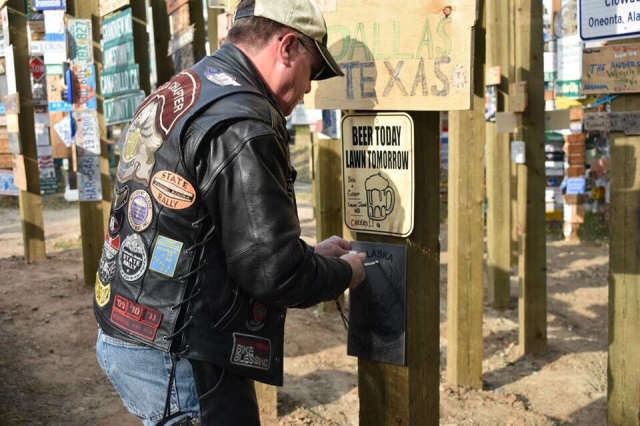 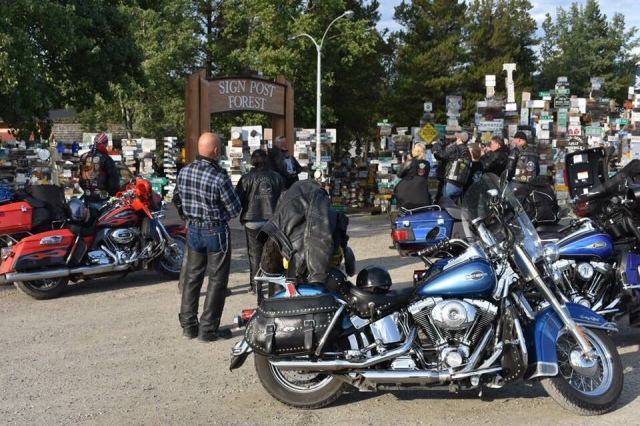 I decided to stay at the hotel and try to relax my stomach. Everyone else went to Dewey’s for some burgers and socializing. Our friend and customer Tom Evans happened to be passing through at the same time on a road trip so he hung out with everyone. 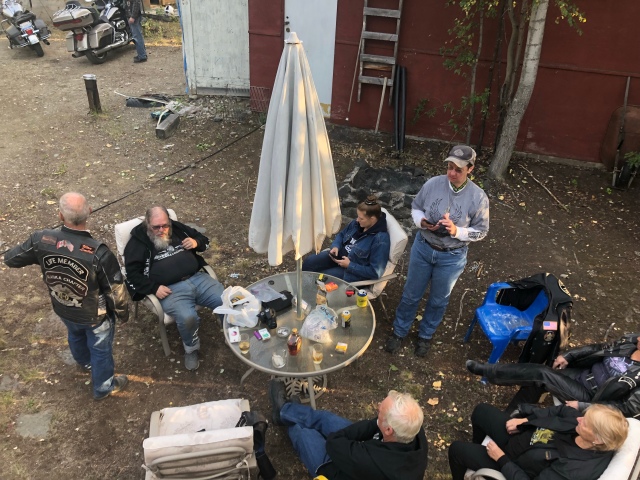 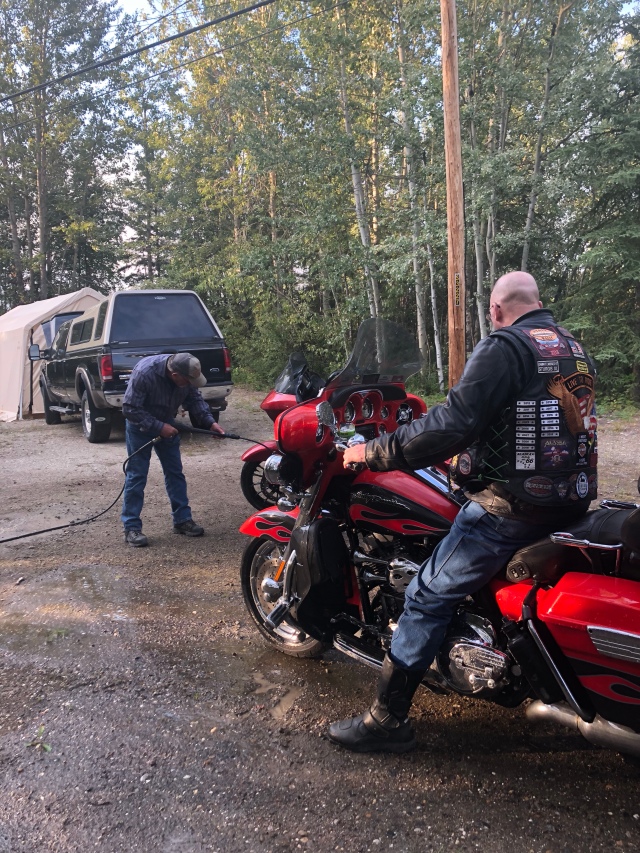 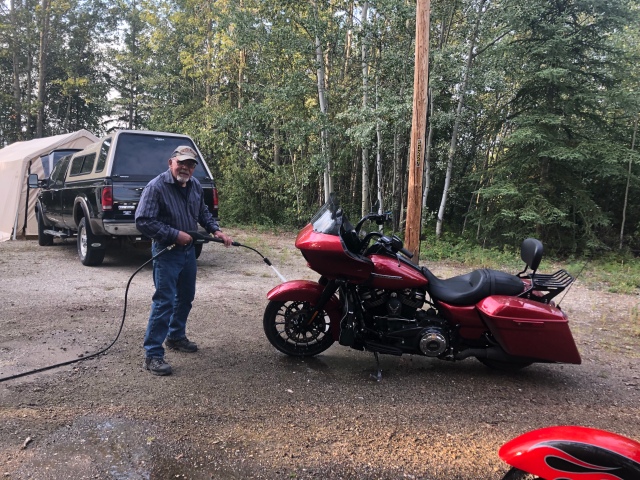 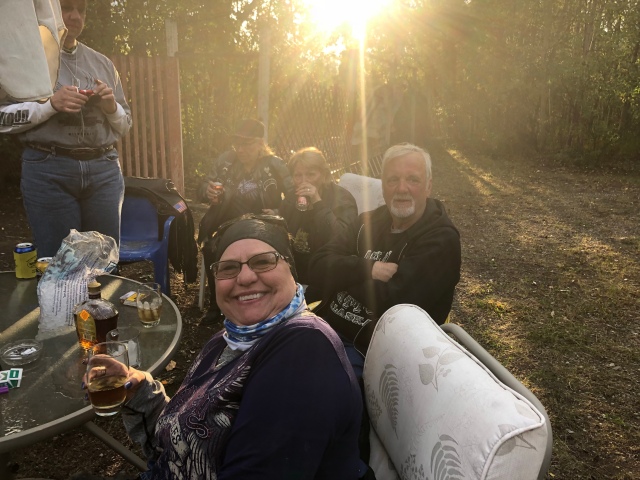 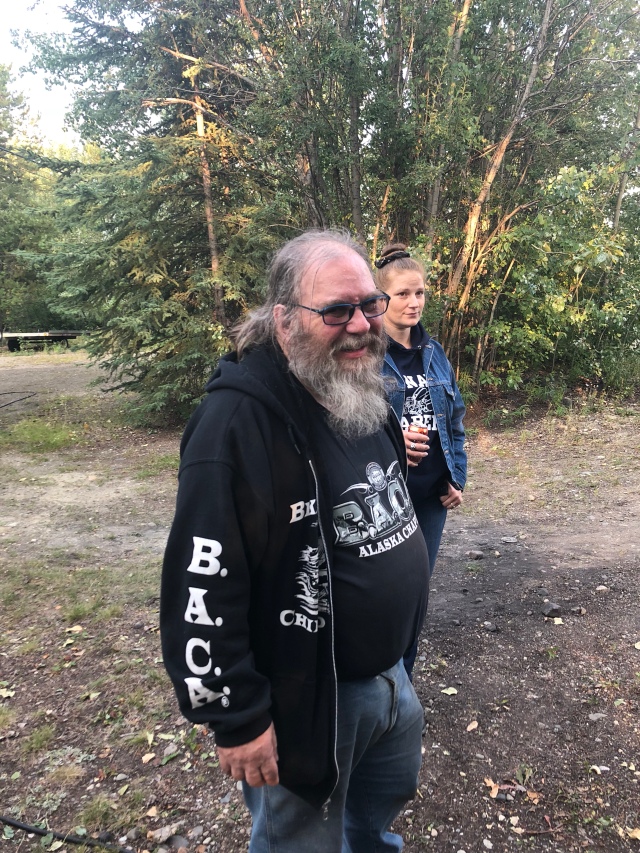 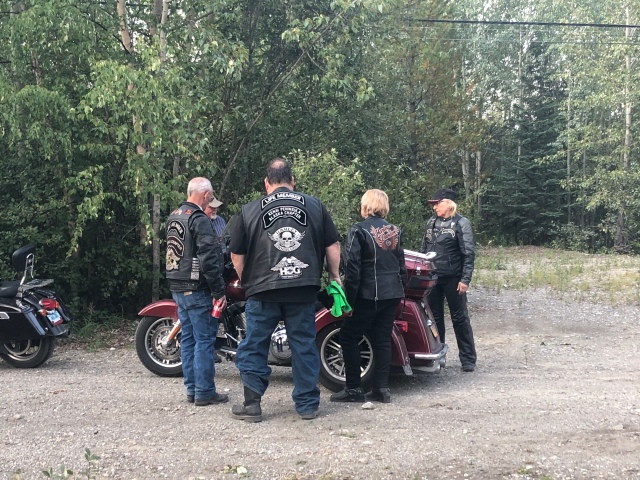 Sarah ran to the store after dinner and picked me up some ginger and got herself a new pair of shades. While I was sitting here writing the blog Barry brought me a milk jug with some whisky in the bottom of it. As long as it isn’t mixed with milk, I think I am going to make a ginger and whisky concoction to kill off this stomach bug once and for all! Tomorrow we will be heading to Bell 2 Lodge on the Cassiar. I am excited for this part of the ride since I have never been on the Cassiar.