Sarah and I got up early this morning so we could hit the road. While planning this trip Sarah got in tough with Rob Carpenter “Rob_1wheelrevolution” on Instagram. He is an amazing stunt rider that lives in Billings. When she told him, we were coming through town, he said we could stop by his place and chat. As the plans unfolded, he said he would meet up with us on a back road and do some stunts for us! So, we had to get to Billings by 5:30pm to meet up with him. I also wanted to get here early enough to stop by Beartooth Harley-Davidson and visit the owner, my friend Barry Usher who received my Rogue Rider t-shirt in the mail for me.

We left at 8am and hit the road. We were on HWY 93 for about 112 miles this morning and it was cool out and the road was curvy and hilly through the mountains. We hadn’t put a lot of layers on and it was a little cooler than we thought it would be but we kept on hauling @$$. There were tons of hills and mountains but it was still smoky and hazy so I couldn’t really see the scenery. We were on a mission to get to Billings quickly so we headed straight away. We got on interstate 90 and the speed limit was 80 so we kept hauling ass. We had to stop for gas, so we got a quick refill, used the bathroom and headed out. 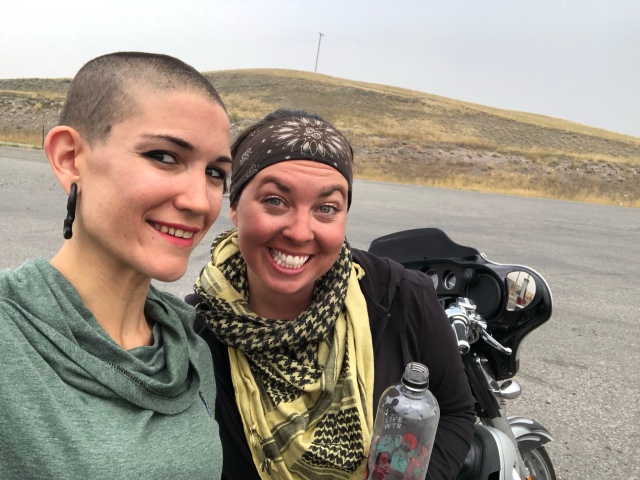 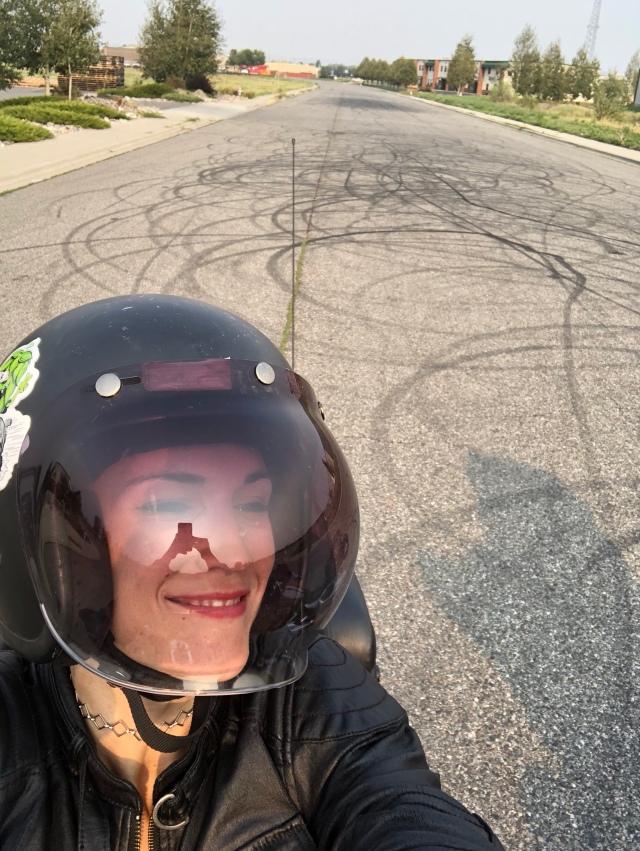 At this point, we pretty much just hammered down and didn’t stop except for once more in a small town called Livingston for gas. We pretty much rode non-stop from 8:00am until 3:30pm with just two quick stops. When we got into town our first stop was Beartooth Harley-Davidson. We parked and went in and found Barry Usher and chatted with a bit. He had my Rogue Rider shirt in his office and we chatted about the ride. I asked him if someone could reset my pin code on my bike, since I didn’t know what it was set to originally. When traveling across country, it is important to know what your code is in case your fob flies out of your pocket or the battery dies in the middle of nowhere. I pulled into the service department and the guy working the counter was very nice and helpful. He pulled my bike in the back and I asked if they had a wash guy working. Barry and the service advisor both said they didn’t, so I asked if I could use their wash bay and clean it up. Next thing I know, Barry is back there cleaning my bike himself. Such a cool guy! To pay him back I went shopping and bought a couple shirts. Sarah got some super cute shorts and sandals for the warmer weather we are getting into each day. Sarah pulled her bike into the wash bay and washed it herself and Barry and I bulls&**# about business and his location. He has a well for water so they can’t offer washes all the time because the water is too slow, so it was a real treat that they took care of us and washing the 3,000+ miles of grime off.

We loaded the bikes back up and headed toward our meet up spot with Rob Carpenter (Rob 1Wheel Revolution) on a back road in an industrial area. We were early so, we turned around and headed to a brewery I saw on our way there. Of course, it is a brewery, so no wine, so I broke my years and years long stretch of no beer and got a hefeweizen that the gal said was their most popular beer. We ordered some snacks from the food truck and I drank my beer. The wind started kicking up really bad, so Rob messaged Sarah and said he was gonna wait a bit to see if it died down. We left he brewery and headed back over to the back street and waited. We took some photos with all of his awesome burnout marks and waited. 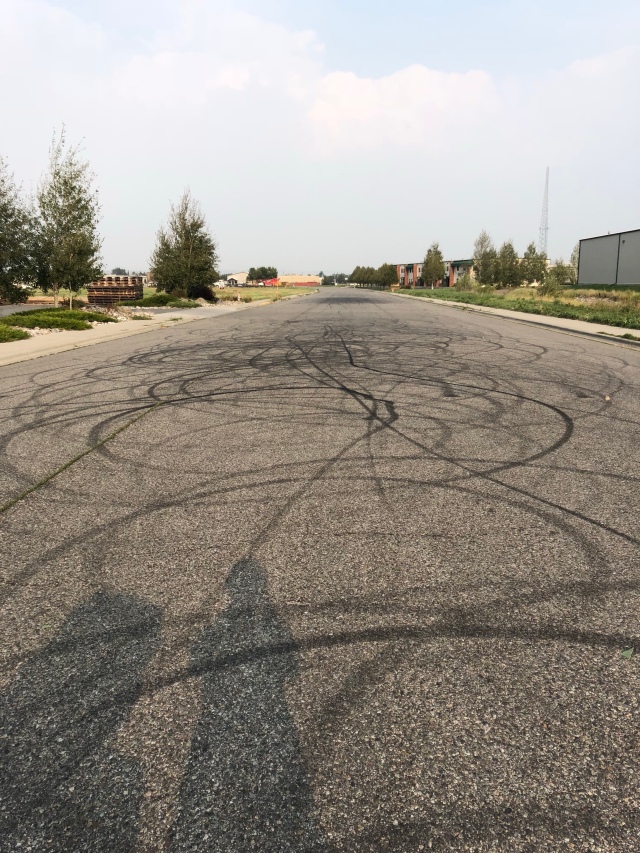 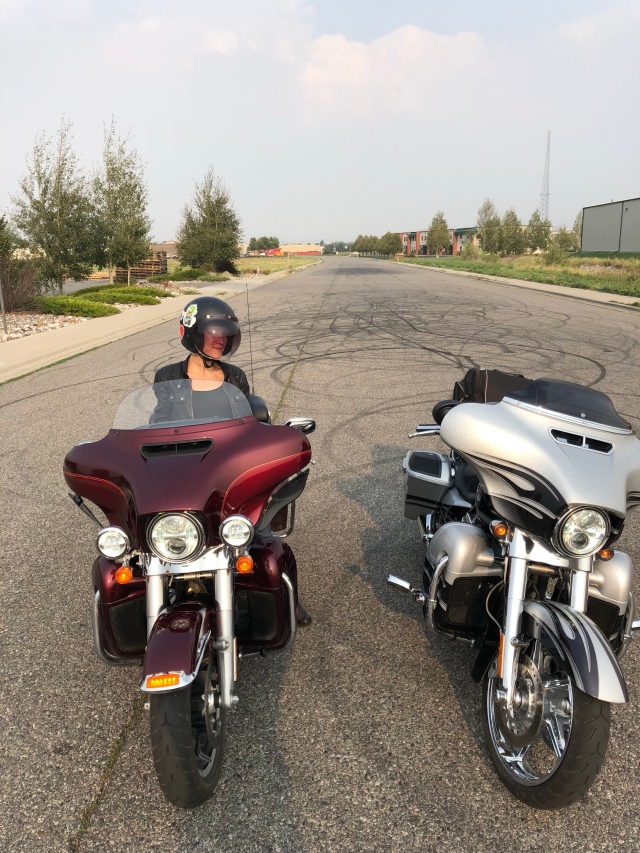 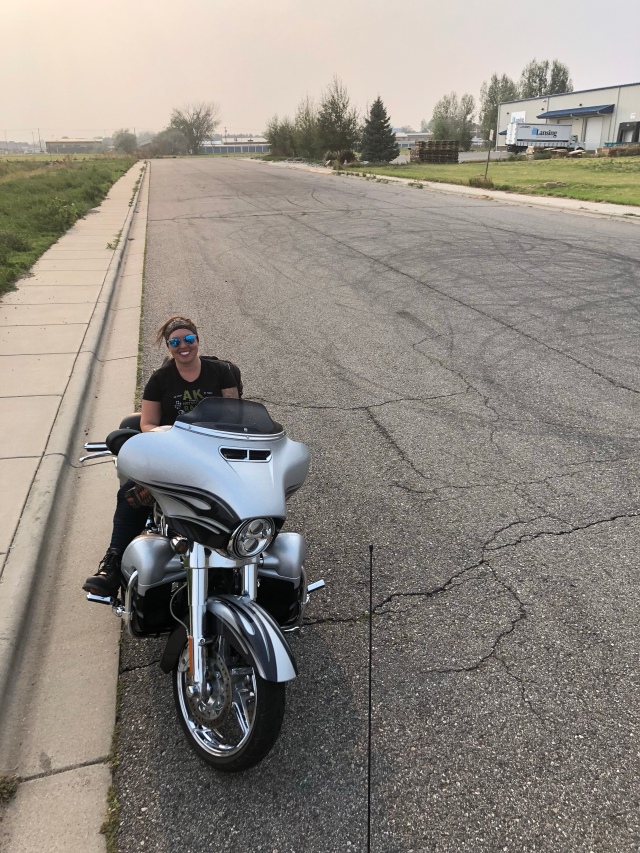 He finally messaged back and said he was going to head over to the spot and meet us there. We waited for a bit, and he finally showed up on a sweet Harley-Davidson Streetglide. It was beautiful. I have to admit I was not too familiar with him prior to this trip, but the man knows how to make a stunt bike both functional and beautiful. While he was warming up the bike and doing some burnouts, he had a fresh tire on, he blew the oil dipstick right out of the bike. 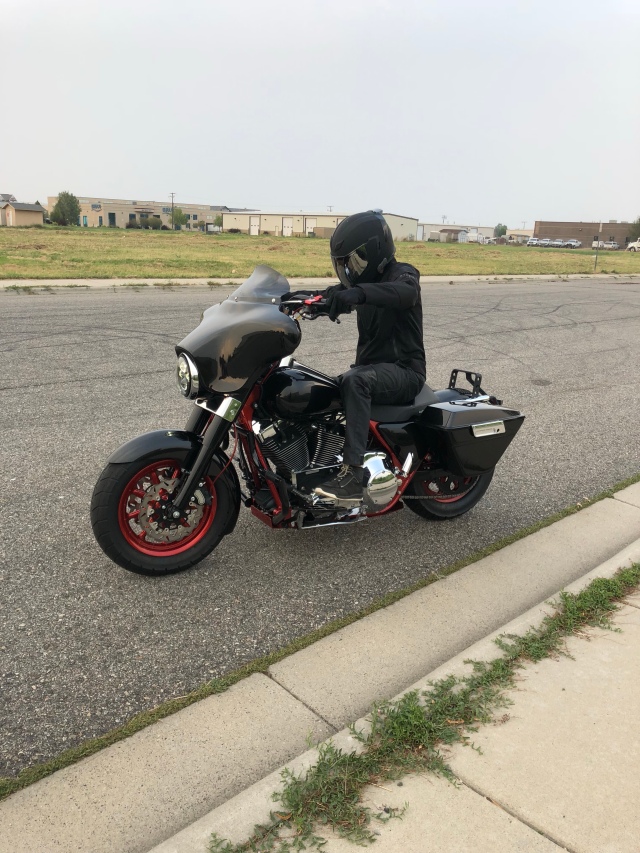 Thankfully I had a rag, so he was able to wipe it all down. His friend and photographer, Jake showed up on his R6, also a beautifully clean bike, and hung out with us while Rob stunted around. For all of you reading this, you have to watch our live video on facebook to really appreciate the private show we got on a back road in Billings,

MT. It was awesome, Rob is truly talented and a genuinely kind person. He was doing burn outs and wheelies and Sarah got to get on his bike and do a bunch of wheelies with him. It was awesome!!! I know this made her trip as she and Levi watch him on Instagram and appreciate his amazing talent. I invited Rob and Jake to join us at our Rogue Rider part at Tiny’s Tavern for dinner and they said they would join us, but Rob had to swap bikes first. So we followed them to Rob’s lovely home, so he could get something that wasn’t covered in oil.

He had a bunch of Harley’s, all beautiful and clean and customized, in his garage. His new Roadster was on the lift getting set up to be a stunt rider. Rob and Jake (who swapped to Rob’s 2018 Fat Bob same color as mine, because he couldn’t show up to a Harley party on his R6 and Rob on his Dyna) led us to Tiny’s through the backroads of Billings. 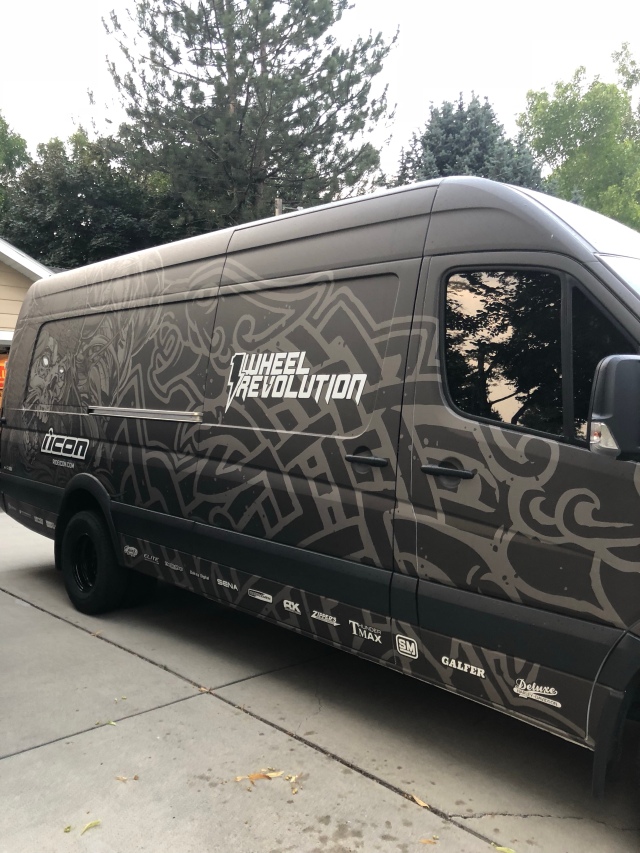 We were late, and yes I had received several messages telling me that everyone was there and the food was being served. We rolled up at about half past seven and Rob, Jake and I pulled up on the sidewalk and rode down to the bar and parked on a cement spot there by the entrance. Somehow Sarah had figured out there was more parking and parked with the rest of the bikes. I like to park on sidewalks, so I was happy with our spot. 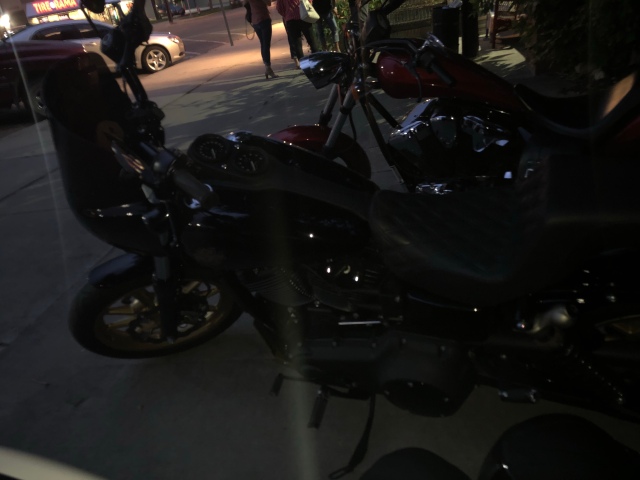 We headed back and joined the group for some BQ dinner and conversation. Rob, Jake, Sarah and I grabbed a table and bull$*(%ed and ate. Barry asked if I wanted to make an announcement to the group, which I promptly declined but I did encourage him to get us all together for a photo. 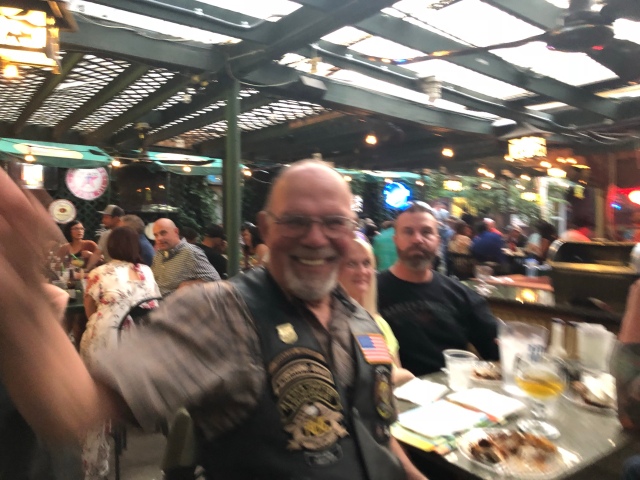 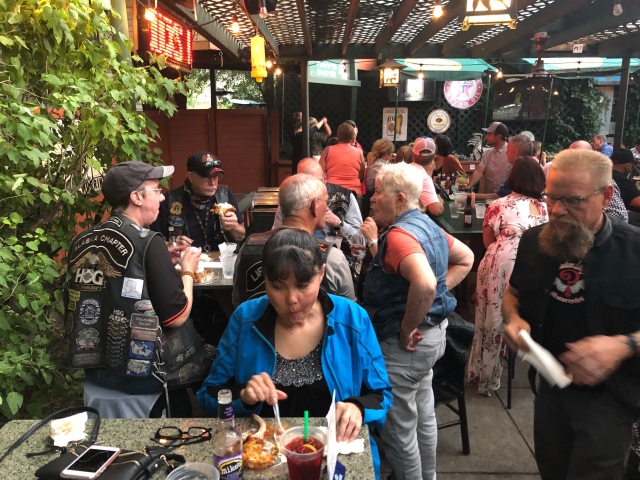 So, eventually we all gathered up on the stage and Rob helped the waitress take our photos. My awesome dad, and all the Rogue Riders had a cake made that said “Happy Birthday” to myself and Dewey (our token Canadian) but it will also be Dianna’s bday on the 4th of September so we all got cards and a song from everyone. 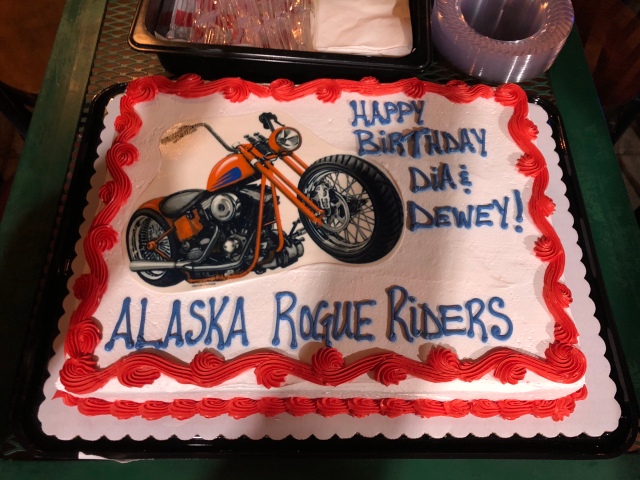 It was great! I love that I have my birthday on the road every year, it makes for an exciting and less predictable adventure. Usually I am at the Harley-Davidson Dealer Show, but every 5 years I am on my way to Milwaukee. I am definitely keeping up this tradition and just finding more stuff to make it cooler every year. 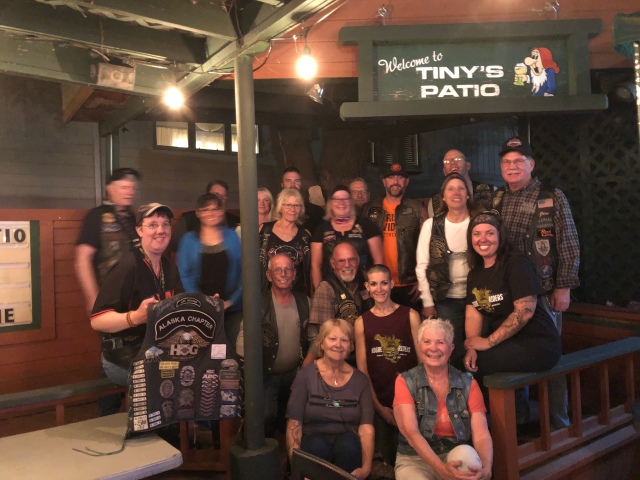 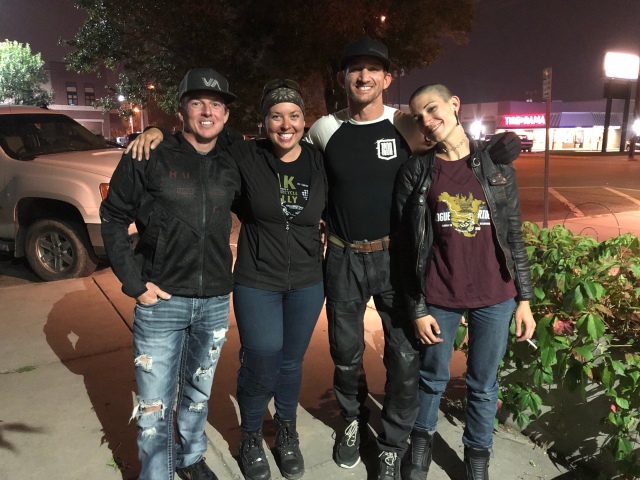 From here on out it is pretty easy rides, hot but easy. We will be in Spearfish for 2 days (tomorrow is my BDay…the big 32) and my friend Pat Kelly is meeting us from Colorado. 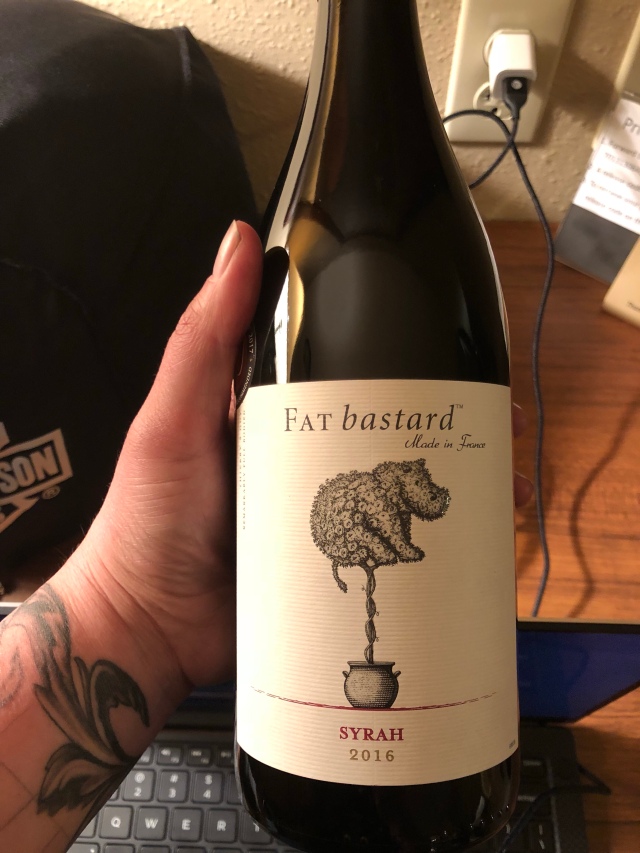 Sarah and I are going to visit Rob’s coffee shop, Black Dog Coffee House in the morning and then she eluded to some sort of Bday surprise between 9am and 10am so I guess we are doing that and then heading east to Spearfish.