Today was AWESOME!!!! Oh my, I am still stoked from my adventure today, I can hardly stand it. I am so glad I took this trip! This morning I woke up at about 6am and after packing up the bike and eating a quick breakfast I was on the road about 15 till 7. It was pretty liberating just brushing my teeth and not putting on any makeup! As I headed out I had my route written on a piece of paper, since my GPS is impossible to program the way I want to go! It was a little overcast and I got a little sprinkle of rain now and again as I was starting but it was a relief from the heat of yesterday. I headed north on 60 to Wickenburg and then got on 89 at Congress. I was a little unsure of myself for the first part of the way, since I was relying on my handwritten note to guide me, but sure enough I made it to 89 which was the majority of my route today.

Once I was on 89 it was breath stopping scenery around every corner! When I was approaching the mountains it went through, I pulled off and put on my leather jacket. I could feel the cooler air and I could see the rain. A guy on a Fat Boy rode by me in a Tshirt, but I had already been riding a bit and had felt the cool of the air, so I was glad I stopped. A few miles into the forested hills, I found him pulled off on the side of the road putting on some layer. The ride to Prescott was much more curvy than I anticipated but it was magnificent! It was much more like a forrest than I anticipated and I was surprised to find signs for Elk around here! I stopped in Prescott at the HD shop, which was just a souvenir shop and was still closed. While I sat there reviewing my map a guy with a fat little chihuahua stopped to chat with me. He has an old 80′ something Heritage and said there was “no replacing his old chugger.” He complimented my bike and said “I’m sure that 103 rides nice!” We talked about the route and he was telling me how great 89A was, but I told him I didn’t think I had time to take it and was planning on taking a more boring route. While I was making my way through the small old western looking town I had a change of heart. Yesterday I had read that part of 89A was closed because of the wild fire, but it was raining a bit so I figured I would take a risk and take 89A. I stopped at a little cafe and spoke to some locals and they informed me that the 89A was open through to Sedona. They gave me the directions to get to 89A, since I had passed the main exit for the road, and I was on my way. As I walked out the woman who was working there (I am guessing she was an owner) hollered after me to “be careful.” 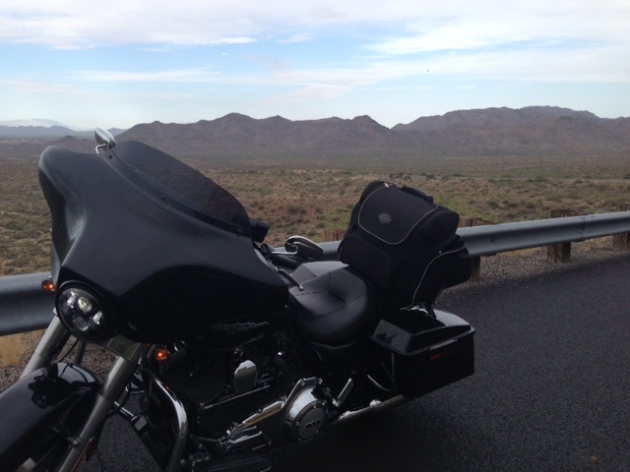 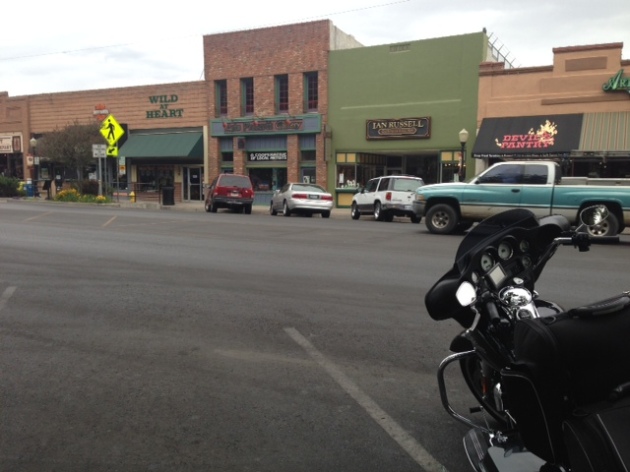 I took 89A which was BEAUTIFUL, all the way to Sedona. There was a lot of curves and forest, but the best part was Jerome. When I was making my way into Jerome I was climbing elevation and taking a lot of twisties. The town itself is shocking, it literally looks like something you would see in another country. The houses and building are built into the side of the cliff. The town starts at the top and the road is lined with buildings on either side that are built into the side of the mountain. You wined through town switchback after switchback as you are dodging crazy tourists trying to park and delivery trucks in the middle of the street. I really felt like I was in a small rural town in France or Ireland. If I would have seen the coffee shop before I had passed it I would have stopped. From there it was all downhill, not the trip, just the ride down the mountain…

The continued ride on 89A was pretty as I approached Sedona. The ride into Sedona was pretty cool. You could see the famous skyline with the odd shaped rocks and remained of earth that appeared to be red towers, with most of the earth removed and only skeletons remaining. The colors were outstanding and you could see why the town tucked in between these red formations has become a tourist hot spot. I decided I would stop for some food and a coffee, at this point I was pretty wet from the continued rain. I stopped in a little bakery/cafe and got a cappuccino and a cup of soup. After lunch, I was looking for the HD shop. While I worked my way through town, my GPS made it look as though I passed it. I was pretty much to the end of town and was still on 89A when I saw the big sign stating that 89A was closed between Sedona and Flagstaff. While I sat there cursing and looking at my HOG map, I noticed the HD shop was a little souvinere shop, again, in the second floor of a strip mall. I parked across the street in front of a church and walked over. When I got inside I asked the ladies that worked there if I could get through on 89A or if I was going to have to back track half of my day. Luckily, there was a smaller scenic byway that was not really visible on my HOG map that left Sedona and connected to the freeway 17. I walked around the tiny little shop for a bit, and the rain wasn’t letting up so I figured I would just get on my way. The ladies told me to “Be Careful!” and I headed out to my bike. I took shelter in a covered sidewalk by the church to put on my rain pants and then covered my bags with the rain covers. I had to back track a tiny bit, but found 179 south. The road was actually really pretty and was a scenic byway. There were a lot of picturesque views of the red rocks that were left behind after centuries of rain or whatever it was that carved out the landscape around here. 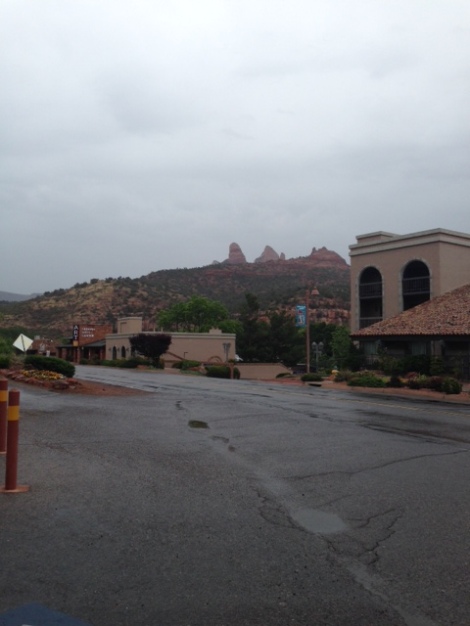 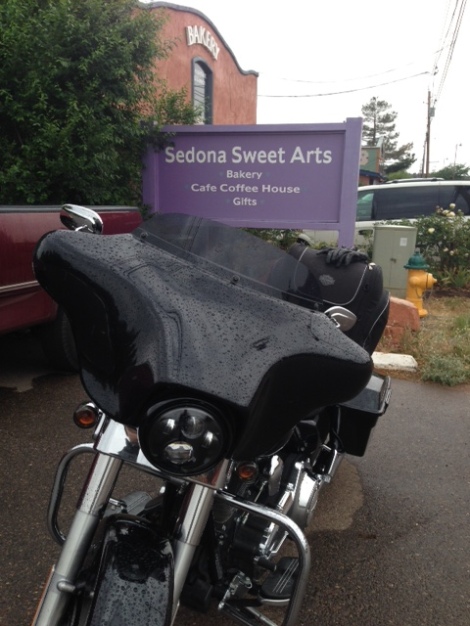 I made it to 17 and was headed to Flagstaff, and my intention was the HD dealership around there. The shop is a big one, and it is off of the connecting freeway 40 that heads east or west. I passed the freeway and stopped for gas and decided I didn’t really want to stop again so I found my way to 180 which is the road I would take to my destination for the evening. Again, it was a lot of forrest, which I am still amazed there is so much of in Arizona. As many times as I have been here I really had no idea there was so much forrest and wildlife. It was much cooler after Sedona, although the rain had stopped I was glad I had my rain pants to add an extra layer.

I arrived in Tusanya which is near the park entrance for the Grand Canyon. Because it is a tourist trap everything is overpriced. I stopped at the Best Western and without even really talking to me the woman behind the desk told me she would find me the cheapest rate they had. I guess I looked like a poor broke biker bitch. There nightly rate was $180 and the HOG discount was a whole $10! I got back on my bike and went to the next spot. I checked online and they all were over $100 and the Holiday Inn Express, was almost $200. So when the Grand Hotel (no chain affiliation) was $139 I figured that was the best I would get. I did about 320 miles today and although it was early, around 3pm I wanted to ride into the park and check out the Grand Canyon. 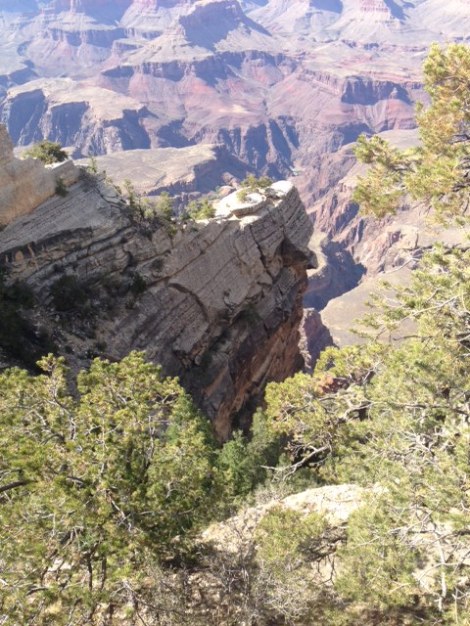 After I unloaded my bike and cleaned up a bit, I got back on my bike and rode into the park. I did the tourist thing and walked the rim. It was pretty amazing. It really is HUGE! I rode around the park area a bit and did some more walking. The sun was out so it was nice to feel some heat after a little bit of a chilly day. I made my way back to the tourist trap town and ate dinner at my hotel…I am pretty sure all the food on my plate was prepared at least a day before and reheated…not so impressive but what can you expect in a tourist town. 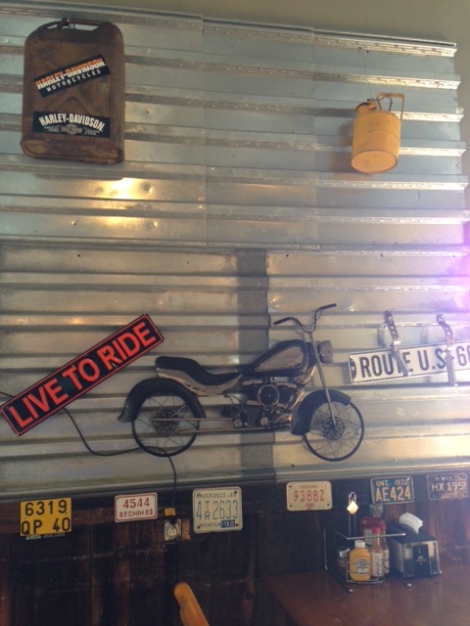 Tomorrow I am planning on riding to Prevo, UT or somewhere near there…