Started the second day of riding with an awesome ride through smuggler’s notch north or Stowe Mountain Lodge. We were on a single lane road, like what was in Ireland! We were riding through these twisty corners with giant boulders blocking your view on the other side. It was awesome! A great way to make sure you were awake with a little rush of adrenalin. 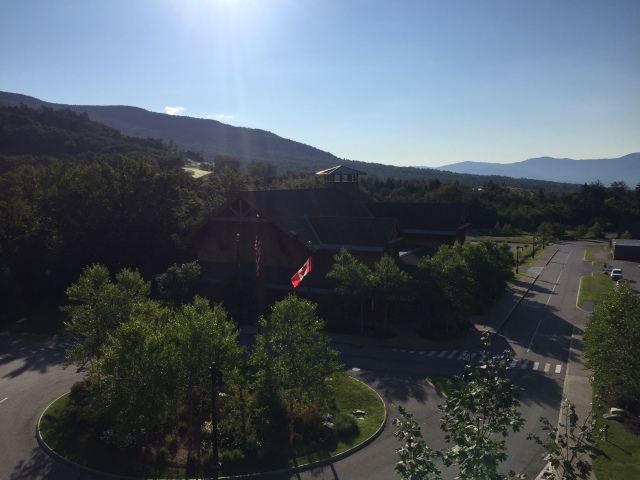 View from the room

We woke up around 7am and slowly got ready for our adventure. We got the bikes loaded up and pulled them out of the parking garage to make our plan via the GPS in the bike. I haven’t spent too much time using the GPS in my bike in Alaska, so I got a little frustrated with it and decided to use a piece of paper and my memory to find our way around today.

After our exciting start to the day, we enjoyed riding on the back roads through Vermont for a bit. Around 10 I was starting to feel hungry and when we pulled into Hardwick, and I saw a bunch of the riders from our group so I pulled over. We wandered into a small little cafe and ordered some breakfast. Connie’s Kitchen had a fun chalkboard menu and a cool atmosphere. We opted to sit outside to enjoy the town small big intersection feel of where the kitchen was located. We watched cars come and go and met a DOT commissioner on his way in for breakfast, with a curiously for all the new Harley’s in town. 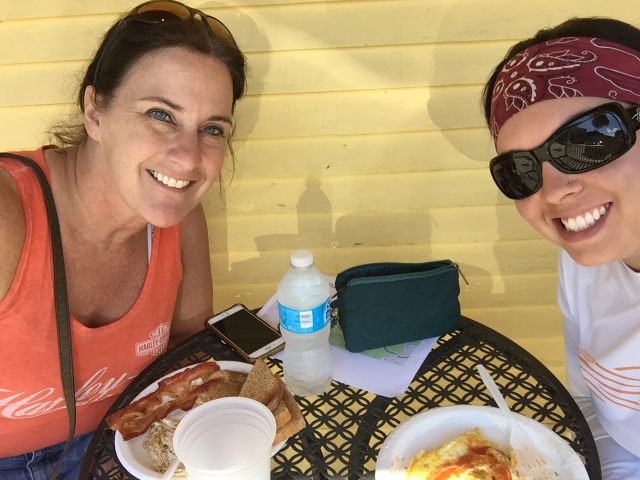 After breakfast we planned our next part of the ride and decided to stick to the route we originally were going to take on the Kancumangus Hwy. On the way toward the highway we were pretty much only on back roads that took us through a lot of small towns. It was some great scenery but a little hard on my clutch hand 🙂 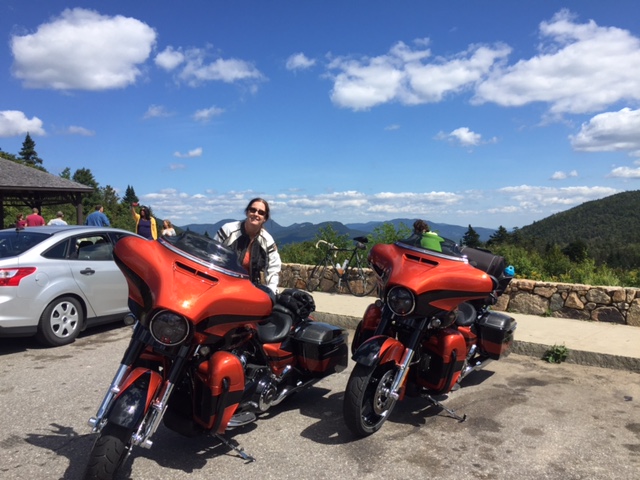 The highway was great, very beautiful and some nice twisties. I have learned I am not going to get to go fast on these roads, so I finally settled in to staying between 2nd and 4th gear. The bikes are running great and staying pretty cool. People started to notice the new motor when we stopped along the way, like when we stopped for gas and had to go to the local laundry mat to find a bathroom! I had a guy from New York offer to buy my bike if I could drop it off in New York on my way back. I countered with an offer for him to come pick it up in Arizona…no dice!

While I was following the signs for the roads we were supposed to follow, we stumbled onto a little Harley-Davidson location (merchandise only) which was perfect because I needed a white long sleeve shirt to keep the sun off me and my body cool! They had a men’s white wicking material shirt right when I walked in…mine now! We chatted with some other riders and let them listen to the new motors then headed back out…the right way this time 😉

It is a pretty slow pace riding around here, but when we hit construction a little under 30 miles out of Portland, it was REALLY slow!! At least the construction around here consists of very packed down dirt that is oiled and not a lot of loose gravel. After a few trips down the AlCan I am well adapted to construction. The irony in the situation, was I was being critical of the road conditions while I was bouncing off of frost heaves and dodging breaks in the pavement, then I had to ride through 6 miles of “construction” to fix those issues! The new suspension is great by the way! With all my gear and stuff on the bike, I might need to adjust it a little, but it is a simple turn knob with a schematic in the owners manual with settings for weight…I guess I should do that tomorrow. 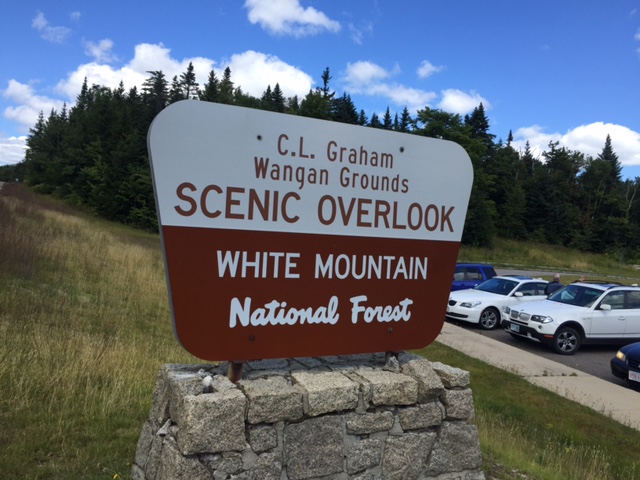 When we finally made it into Portland they had ALL of the roads we needed to get to our hotel blocked. At this point I am HOT, HANGRY and my clutch had is killing me!!! After a good 20 minutes of driving in circles we found the long back way to the hotel. Minus almost getting knocked off my bike by an angry bum (he was mad because he decided he wanted to use the cross walk after I had already started going through) it wasn’t too bad as we got to see the whole downtown areas. I didn’t really almost get knocked off by the bum, he just made a swinging gesture. Finally we arrive at the Holiday Inn, park and unload the bikes. Air conditioning has never felt so good as it did to an Alaskan who has been cooking all day!

Quick showers and a change of clothes and we walked to a cool little spot called the Porthole, which is built out on a pier/dock area. They had whole lobster for only $20 so we decided we should take advantage of the ability to get fresh Maine Lobster! Dinner was fun, but after a lot of slow riding in the heat we decided to lay low and come back to the hotel to plan our day for tomorrow. Originally we were supposed to go to Boston for the final evening of the dealer ride, but Dawn and I both agreed that we would rather miss the free dinner and drinks to avoid the shit show of riding through Boston! The hotel was DOWNTOWN…I can’t even imagine this Alaska girl dealing with all the jerks there and not losing my mind!!

So we are now going to take a scenic route around the coast of Maine (north) then head west back across New Hampshire and Vermont to New York.