Yesterday, I took a day off from the road with my friend Chelsey. We got up and got ready for the day. We wanted to get massages first then maybe check out a winery. We called every singe massage spa in town and not a single one had openings! I guess that is what everyone wanted to do on Labor Day! So we headed to Panera to grab some breakfast and make a plan. We were moving from the hotel to her vacation time share so we decided we would look for a winery, move the bike and our stuff over to the time share and then head to a winery for lunch. We looked for a good 15 minutes and finally found one in Athens that was open on Labor Day.

We were able to check in and get our stuff settled in the room and did a quick driving tour of the facility then we headed to Tara Winery. As we pulled into the driveway, we saw the beautiful colonial style home in front and then in the background the restaurant and tasting room. We each got a 5 wine flight which ended up being 9 different wines and a taste of their new beer from the brewery they just opened. We got some food and everything was amazing. We sat outside despite the heat for the view and enjoying watching the farm dogs wandering around.

The front view of the estate at Tara Winery

After the winery we headed back to town and found a place to get pedicures. It was a nice way to relax and as close as we could get to a massage. The guy who worked there gave us wine, which was probably not really legal, but I wasn’t gonna complain! He worked on my feet and the whole time was filled with funny comments and failed attempts to convince me to “date an Asian man”! We had a good laugh and I had to tell him I was leaving town and he was sad to say that he would “never get to see me again.” From there we grabbed some food and made dinner at the resort and played a couple rounds of Battleship, which of course Chelsey kicked my ass.

The rest day went too fast, but we were up early making breakfast and getting on the road. I was heading out toward Tulsa at 8am. Within the first 20 minutes I came up on a bad wreck, that was still being dealt with by the fire department and police. The car looked like it had been a single vehicle accident and had bounced off the guardrail and possibly rolled. Just past the car, there was a GIANT wild hog that was probably the cause of the accident. The guy at the winery was talking about the wild boars and how destructive they are. This thing was big brown and hairy with tusks!

Since it was a pretty straight shot to Tulsa, I figured I would just trust my GPS to get me there. When I put it in my phone it took me through Paris, TX basically just straight north from Tyler. Unfortunately my GPS was not on my side today. I came upon a construction area and the guy standing there said it would be a little bit of a wait. So, I shut down the bike and we chatted for about 5 minutes about my trip and the hot weather. Eventually the pilot car came through which is generally an indication that it could be some rougher construction…

I was in the front of the line which is always good as a biker, because it is actually harder to go slow and be behind a car that is changing speeds. At first it was just some rough dirt road and then it got worse and worse. It started to be filled with big rocks that were literally causing my tires to to turn and jolt. We had to stop as a large end dump truck dumped a bunch of gravel to the right. That is when it got really hairy. We then went up on a little bit of a build up which was deeper dirt and big rocks. It was probably some of the roughest terrain I have ridden on, including on the Alcan. The worst part, is the pilot car started to go about 5 miles per hour and was making it really difficult for me to handle the bike. I literally started yelling “GO! GO! GO! DON’T MAKE ME F&*(#%@^% STOP!!!” I was in a pretty panicked state and thought I might drop the bike, but thankfully her windows were rolled down and she immediately started to go faster. After that I pulled into the next gas station I saw. I will admit, I was shaking, it was pretty challenging. I filled up and hit the road. The first 2 hours of the ride were pretty cool with some cloud cover remaining from the storm that had rolled through last night.

Whole lot of nothing

As you might imagine, there is not much between Texas and Oklahoma. Lots of farms, trees and fields. It started to get really hot as the day went on, but I only had about a 350 mile ride total so I made it into my hotel around 3pm. Today, the folks I met at gas stations and at stops were all very friendly and talkative, nice warm hospitality and a lot of curiosity about Alaska. I pretty much just hauled ass to Tulsa to get out of the heat!

Hot and lonely out here 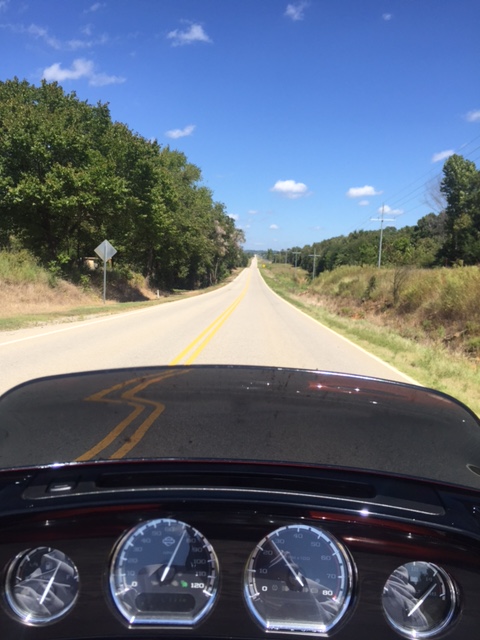 I rode all the way up here to see my sister Bonita who lives in Tulsa. She will be picking me up later tonight so I can have dinner at their house and enjoy some time with her since we don’t get nearly enough.