We awoke to some crazy rider who had been up at 4:15am everyday to ride. Apparently he wants to be the first to arrive. So I basically was up at 4 and really didn't fall back asleep. We knew a lot of the riders would be getting up early to hit the road so we had a plan to leave by 10am. We lazed around, slowly packed and loaded the bikes. We headed to breakfast and then finalized our packing and hit the road. We took the very long scenic route to get from Santa Fe to Durango.

There were some great curves through the Carson National Forest and Rio Grande National forest and many other beautiful areas. There were mountains, rock faces and hills and valleys and surprisingly a lot of forest. We had some great switchbacks and overall good road conditions. We road through a controlled burn through Carson National Forest which was interesting. Pretty smokey.

Rest stop for the crew to eat some ice cream

After we left the Santa Fe area we were in Carson National Forest, and we went through Taos which had a great view of the Rio Grande with a nice overlook on the bridge. The scenery was great and we had a nice ride. It was pretty cool even with the late start around 9:45am! We were the last bikes in the lot at the hotel, but we still were not the last into the dealership. We pretty much rode through today, we stopped for gas and for the “crew” to get ice cream a couple times then we headed straight to Durango. I have a high school friend who lives in Pagosa Springs but I wasn’t able to get ahold of her while we were there getting gas. So we headed on to Durango.

We rolled through town, saw the dealership and headed to the hotel. After we dropped our stuff we headed over to the dealership so they crew could get their Poker Hand stamped and we could check it out. They of course were great hosts and had a big BBQ going on, so Jim and Robin got some of the free grub. We checked out the store and then hung out in the yard a bit to watch the rally. Since Jim and Robin ate at the dealership I looked for a cool local place for Barry and I to eat. I found a brewery called Steamworks Brewery and so I put it in the GPS and the crew followed me. Jim and Robin’s friend Hal joined us downtown Durango and we had a good meal and a few drinks. 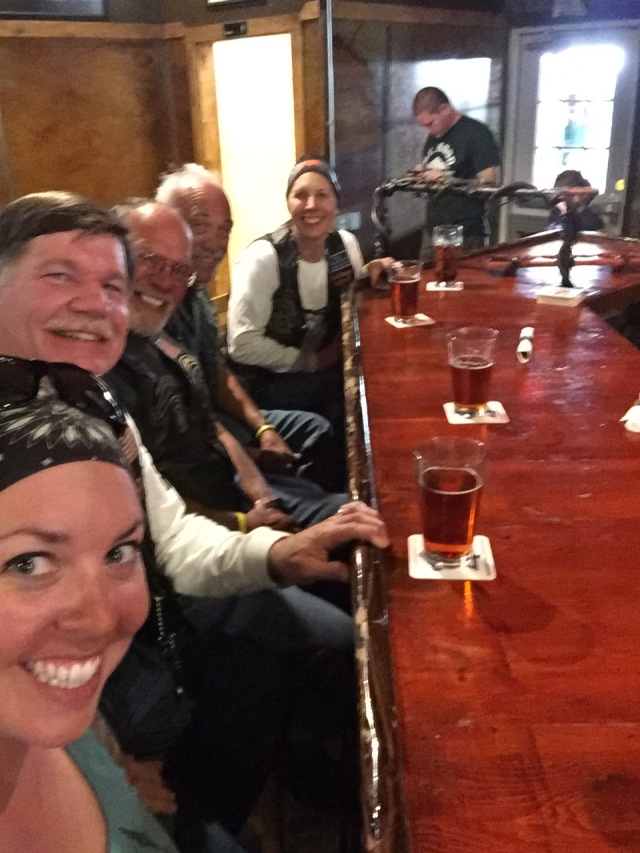 Whisky for my men and beer for my horses! At the brewery in Durango with our friend Hal from CA

After dinner we headed to the hotel where I showered and the group met in the bar. By the time I was down with my shower, they still hadn’t gotten drinks so I was just in time! We had a drink and chatted with Hal, and then headed for the room. I am going to ride to Mesa tomorrow so I am saying goodbye to everyone. What an awesome trip this has been!

It’s official we are all in the same bed!