The end of the journey…

Today was full of extremes and adventures! I got up early and quietly got ready as my roommates continued to sleep. I went down to breakfast and ate a quick bite then back up to the room. The roomies were awake now, so I said quick goodbyes and grabbed my stuff and loaded up my bike. It was pretty cold this morning as I loaded up the bike, so I opted for the warmer gloves and an extra layer under the leather jacket. Leaving out of Durango was beautiful. Mountains and trees all around. It was also only 46* so a little chilly! I took 160 west which skirted the bottom portion of the San Juan National Forest. It also took me past the Mesa Verde National Forest. 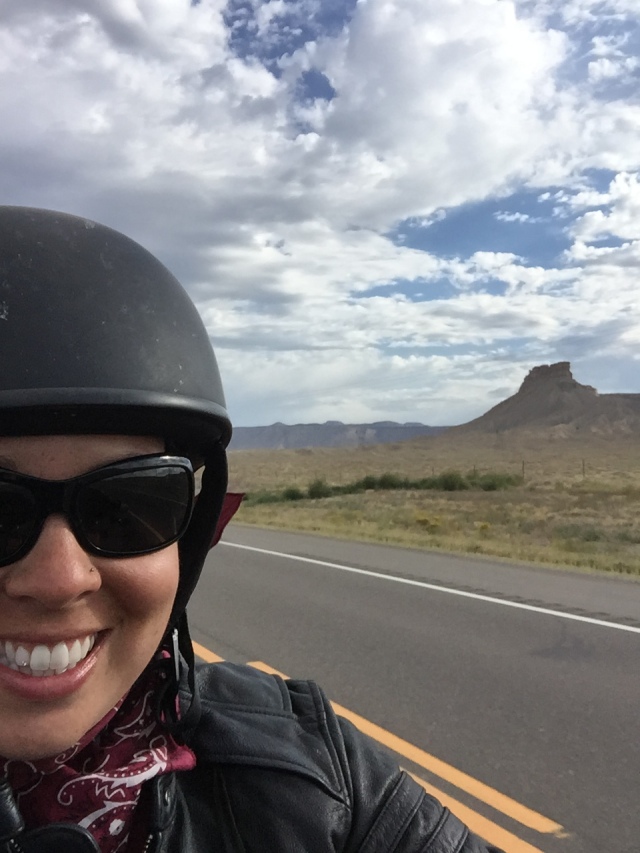 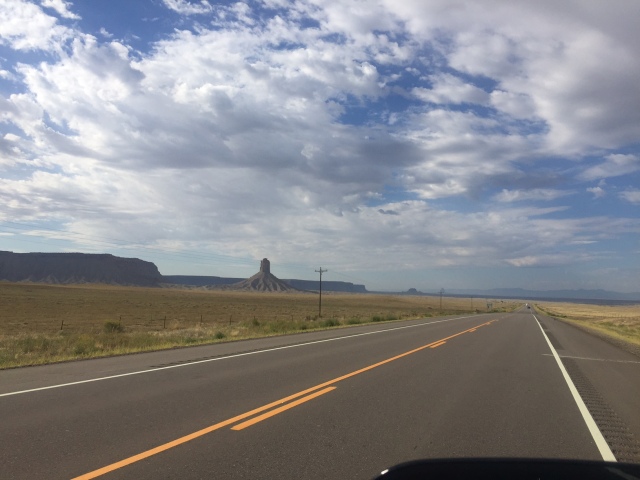 Awesome first half of the ride

I went through the small town of Cortez and saw the local fire department raising the American flag up with the ladder on their truck. I was riding past on Main Street and had to turn around to get a photo with the flag and the truck. I had 9/11 on my mind all day and this was an opportunity to capture a moment of honor in a small town. I pulled in and asked them if I could take a quick picture while they were getting it positioned. The female firefighter offered to move it lower for me, but I thought the angle was just fine. It was was a great moment, Proud to Be an American! 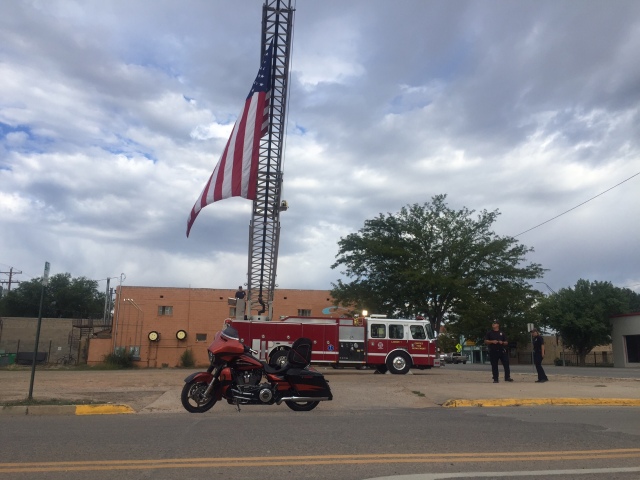 Thank you to those who are first responders in our great nation!

The road 160 takes you right by the 4 Corners monument, which is on Indian land. It cost $5 to got park and walk to the 4 corners of Utah, Colorado, New Mexico and Arizona. I guess I can’t really count Utah in the states I rode through on this trip, but I did that on my last solo trip! The first part of Arizona on 160 was spectacular. There were amazing rock structures, canyons, red rocks and several threatening looking clouds. I managed to skirt the storms, yet again! There was very little traffic on the road, and it was a nice leisurely ride through all the scenery. 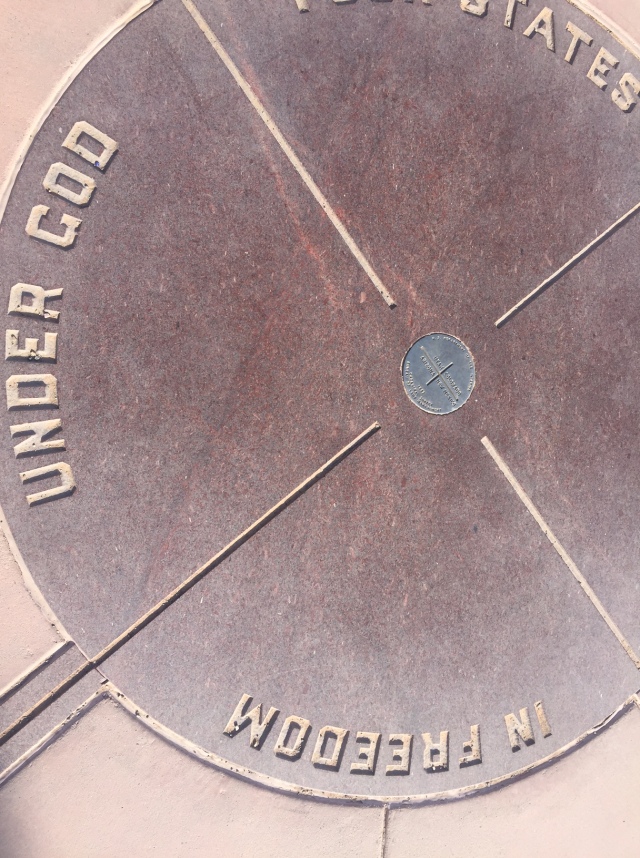 As I got closer to flagstaff I came into the Coconino National Forest. It was beautiful with some nice windy roads and the air was cool. There were a lot of signs for Elk, but I didn’t see any. This whole trip has been pretty much wild game free. I like to see them off the road, but oh well. My original plan was to go from 160 West to 89 South to Flagstaff and then onto the freeway 17 to just hurry home. I stopped in Flagstaff at a gas station and tried to decide what I should do, either get some food or keep going. I opted for some more water and a granola bar and while I stood in the shade I looked up my route. It wasn’t too much longer to avoid the freeway altogether since we are on the east side of Phoenix and taking 17 would cause me to have to go round the 202 for a long way. So I decided to put in my GPS to get to Payson, while avoiding highways. The route took me through Flagstaff and then into the National Forest on Lake Mary Rd. The speed limit was 50 which of course was difficult for me to abide by, but I went past two different sheriffs heading the opposite direction and they didn’t seem to mind my chosen speed. 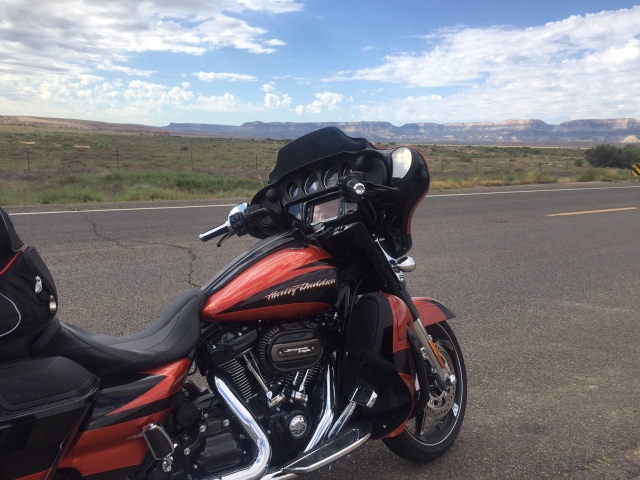 Lake Mary Road took me past, you guessed it, Lake Mary but as it winded through the forest it took me to Mormon Lake. Apparently they need to send a memo to Arizona, because Lake Mormon is no longer a lake but a small pond/marsh. The road continued to wind through the hills and forests and went through Happy Jack and then eventually ended at highway 87. I was surprised at how curvy and fun 87 was! It was up and down and back and forth through some mountains and had some awesome corners. I was pleasantly surprised, and was trying to remember if I had ridden through part of that before, but I don’t think I have, at least not on my own ride.

Some good curves on 87

After Payson, 87 got pretty crowded and full of traffic who must have been out for the weekend. A lot of RV’s, boats and side by sides being hauled. My phone showed a route to our Mesa house that took me off the “Beeline Highway” aka 87 onto the Bush Hwy. As I was heading down the road, I noticed a lot of traffic coming back the other way. It seemed like double the traffic was coming back than going forward. Then I saw two bikers and they started waving like they were motioning me to turn around. So, I was looking for a turn around and then I saw it. Traffic was backed up for who knows how long and I was able to turn around just before the traffic jam. I don’t know what happened or why it was stopped but it was freaking hot out so I turned around.

This morning it was 46* and as I got closer to Mesa it was 108*. I was COOKING!!! So I had to back up and get back on 87 which was even more crowded now. It was getting hotter by the minute and at this point I couldn’t really enjoy the ride. There was a lot of traffic and I was hauling ass to get out of the heat. The last 20 minutes seemed like an eternity and I was sweating through all of my clothes and starting to feel a little weird. I got to our house, parked the bike and just grabbed my purse to get in the house. Of course, the temperature was set to 85* in the house since no one was home but it still felt cool compared to the 108* outside. by the time I got in the house I was shocked at how fast my heart was pounding and how hot I was. It looked and felt like I had just ran really hard. I opened the fridge and found a Lacroix which I gulped down and a frozen water bottle. I used the water bottle for about 30 minutes to try to cool myself down. I started some laundry but it took me over an hour before I stopped sweating and wasn’t completely red in the face. I was going to take a cold shower, but realized the water here is hot because it is hot outside the opposite of Alaska!

This is my close to heat stroke face! Was seriously a little scared but managed to capture the moment because I am dedicated to this blog!

I decided to skip the shower and just relax for a bit and then head over to my favorite wine bar just down the road from our house, Dvine Wine Bar. I ate a yummy meal and had a nice wine flight while I wrote my blog. A good way to end the day. Today I spent most of my day reflecting on my entire journey. This has been such a blessing and so much fun! I just rode in 21 states for 17 days. I was able to spend time with my friends Dawn and Chelsey, see my sister Bonita and share my passion of riding with people all along the way. There were challenges, adventures, experiences and a sense of accomplishment. I had so much fun and I have memories that will last for the rest of my life. I am deeply connected to the brand that I get the pleasure of sharing with others. I am pretty sure that is happiness. 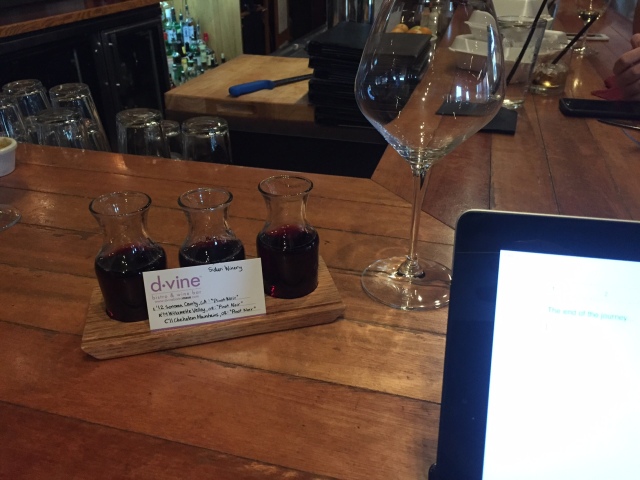 A special thanks to Dawn Morand who made the whole first part of my trip dynamic and so much fun. I enjoyed riding with you so much, and I can’t wait for our next adventure! Also thanks to Chelsey Homan for taking some time out of her busy schedule to give me a day off of riding and sharing her time share with me. Thanks to my beautiful sister Bonita James and her friends and family for the amazing dinner and a nice relaxing evening of conversation and fun. Another huge thanks to Jim Lebiedtz and Robin Brandt for sharing their room with me! I am glad I was able to connect with them on their adventure for the California HOG rally. We had a great few days riding and hanging with all the HOGs on that fun 10 rally! I am blessed and honored to be part of this family! Like I said last time and I apologize mom…Harley Fucking Davidson!!!

P.S. If anyone is looking for a slightly used, in excellent condition 2017 CVO Streetglide mine is for sale in Mesa! I can’t keep that awesome machine tied up in my garage without getting to hit the road but occasionally when I get down here so I hope it will make someone else happy!