Smithers, BC to Prince George, BC 250 miles

We have a vintage Polaroid camera along for the ride to save some memories on something other than the internet. Here’s one from a couple days ago in Yukon Territory.

As I mentioned in my blog from yesterday, we made friends with Shola the gal working at he bar at the hotel. She made some beautiful jewelry from pennies she would get run over by a train near Bali. I bought one necklace from her last night, and she encouraged us to go to her mom’s bookstore and café in downtown Smither’s for coffee and to check out more of her jewelry. We roped Patti into going with us, so we headed over there around 8:30am. 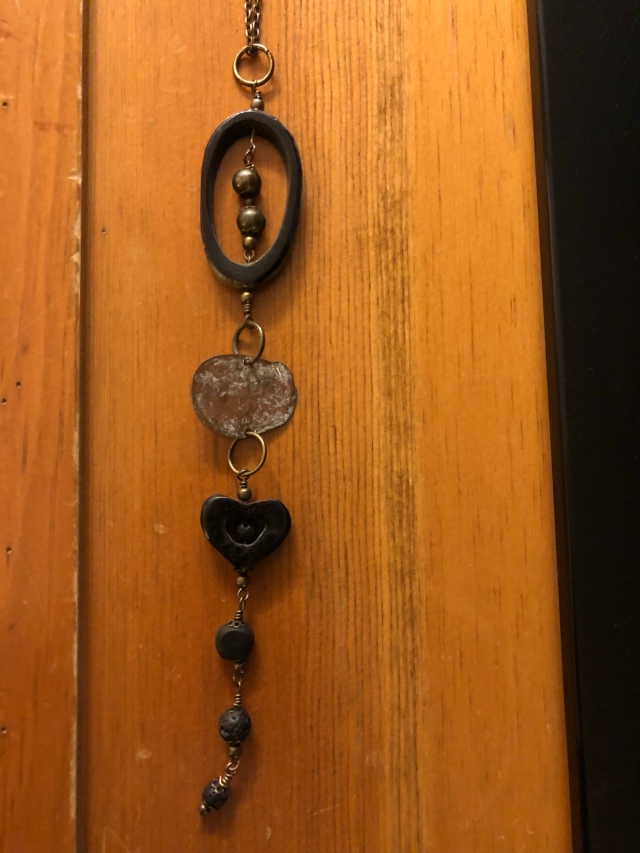 Patti and I bought some cool new jewelry and Sarah and Patti got coffee and I had a homemade Chai tea. Her mom was lovely and we chatted for a bit about our ride and upcoming adventures. 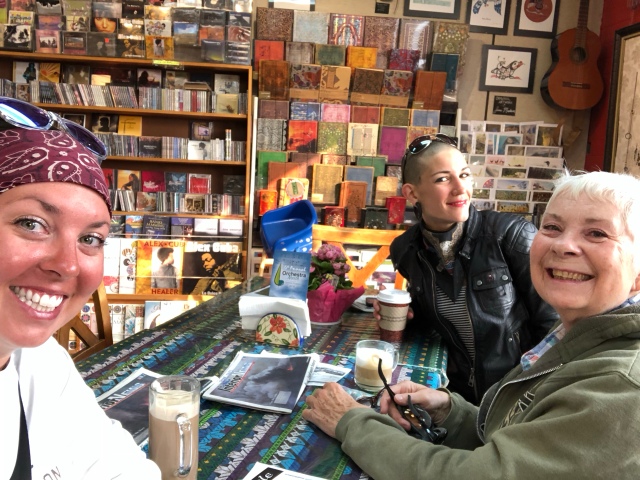 After we finished our drinks we headed back to the hotel. As we pulled into the driveway of the hotel, the rest of the group was getting ready to head out. I didn’t see Barry and Jim, so I thought maybe they left us! We got back to the room and got all our shit loaded on the bikes. While we were getting packed up, Sarah ran to drop our keys off and ran into Barry and Jim. They thought we had left them, but thankfully we reconnected. So, our group today was myself in the lead, then Sarah behind me, then Patti then Cheryl our Canadian friend and then the boys (Barry and Jim) bringing up the rear. Sarah put “Alaska Girls to the Front” on her face mask and Patti had a little pig nose on hers. Today, we were going to be riding through the worst of the smoke. Chris had bought us masks yesterday so we all had something to filter the air. I decided I would rather just risk the smoke inhalation because the mask was hot and uncomfortable. I did get a kick out of Sarah wearing a mask for the smoke, then pulling the mask down and lighting a cigarette at one of the stops.

Once we got out of Smithers we were cruising along and a coyote ran right in front of me. He slowed and checked us out so Sarah and I got a great look at him. Pretty cool to have wildlife that close. The whole way was pretty smoky but the worst of it was near Burns Lake. We also had a large deer run into the road, then stop, turn and head back to the shoulder. The scenery was probably pretty cool, but instead we mostly just saw smoke…lots and lots of smoke. At some points in the ride the visibility was so poor you could only see about 30 feet in front of you. 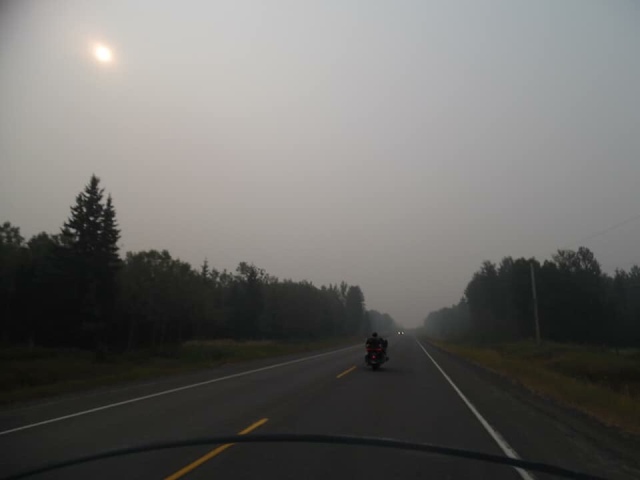 While I was cruising along, we rolled through a town and I saw Dewey waving us into a parking lot. We pulled in, parked and after a few minutes of sitting there trying to figure out why we were there, I saw the giant fly-fishing rod. Apparently, the Canadians are very proud of this “world’s largest fly fishing rod.” We let the group head out before our smaller group and decided we would stop for gas in Burns Lake. I was supposed to get gas this morning with the gals, but I forgot. We all had enough to get us there, so onward we went. When we rolled into Burns Lake we were in the peak of the smoke and there was the rest of the group at the gas station when we pulled into town. Barry and Jim headed up the road to the Chevron while Sarah and I filled up with everyone else. We headed up to Chevron and got passed by the group. After that stop we caught up to a large part of the group, so when the opportunity came up, I passed all the trucks and the group. Oops..sorry not sorry. We hauled ass for a bit, but it was just myself, Sarah and Patti, we had lost the rest of our group amongst the other group. The rest of the way was pretty mellow and was more traffic and some construction. 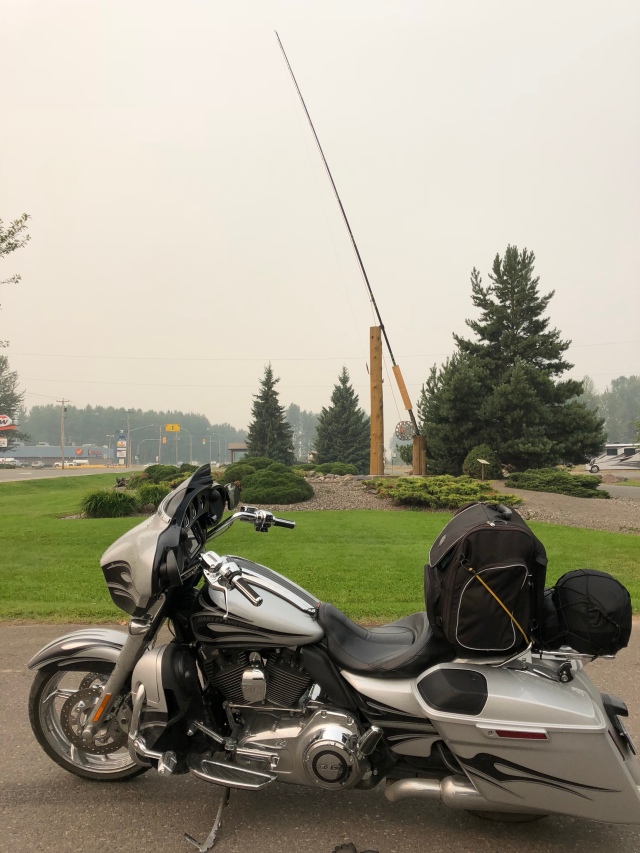 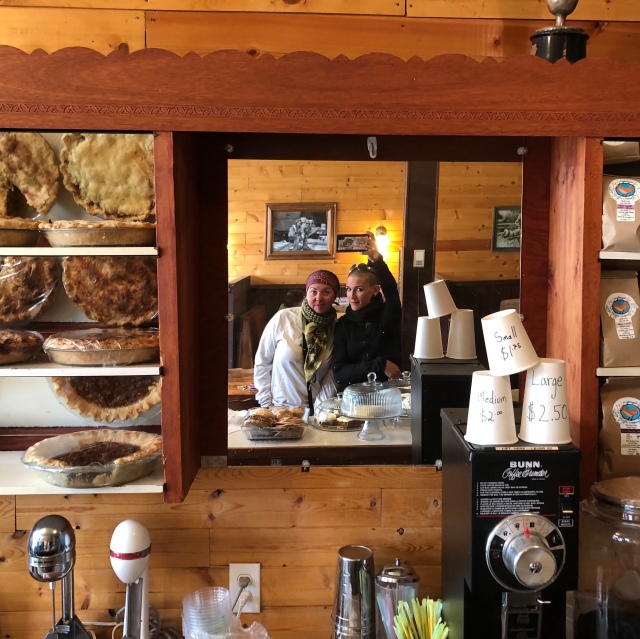 When we got to Prince George we rolled up to the Harley dealership there and enjoyed the AC. In the morning it was super cold, but by the afternoon it was hot and muggy. We wandered through the store and I found an adorable army green leather jacket that fit perfect. I actually bought an army green leather jacket, that I still have, at the 105th. So, I bought that and added it to my collection. I am definitely going to have to mail some gear home when I get back to stateside. 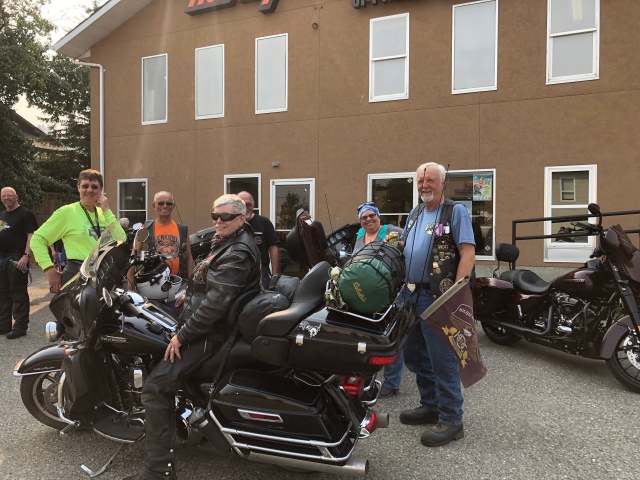 I headed back outside and somewhat discretely changed into a tank top in the parking lot. While we were hanging out in the lot, Trevor, their sales manger came out to put something in his bike. I was walking by so we started to BS. He is a cool guy that loves the brand and what he does. He was excited to hear about our journey and was happy to share some local good spots to food. He recommended “Nancy O’s” for dinner, which is where I am writing my blog from right now. Jim, Barry, Sarah and I walked over and the food was amazing. This is a cool trendy spot that has live music on the weekends and has a mix of BBQ and modern twists on comfort food. We had a “Vegetable Curry” poutine which sounds weirder than it tasted. Currently Sarah, Jim and Barry are enjoying some cheesecake while I finish my blog and my wine.

When we left the restaurant and were walking back to the hotel we ran into Dianna and Donna walking a dog! We asked where they got the dog and apparently there is a dog shelter connected to the hotel and this dog had not been walked today so she was barking and whining. So, being the bad ass Alaskan’s that they are, they took the precious baby on a walk. I love our team. We have such a good group of people. After we gave the dog some scratches, Sarah and I headed over to the Mediterranean restaurant that Chris and Mike were at. We joined them and I had a glass of wine and hung out with them for about an hour. Now we are back in the room and ready to start heading to bed. We have a long 400 mile day tomorrow through the mountains. It is beautiful scenery and hopefully the smoke won’t be too bad. 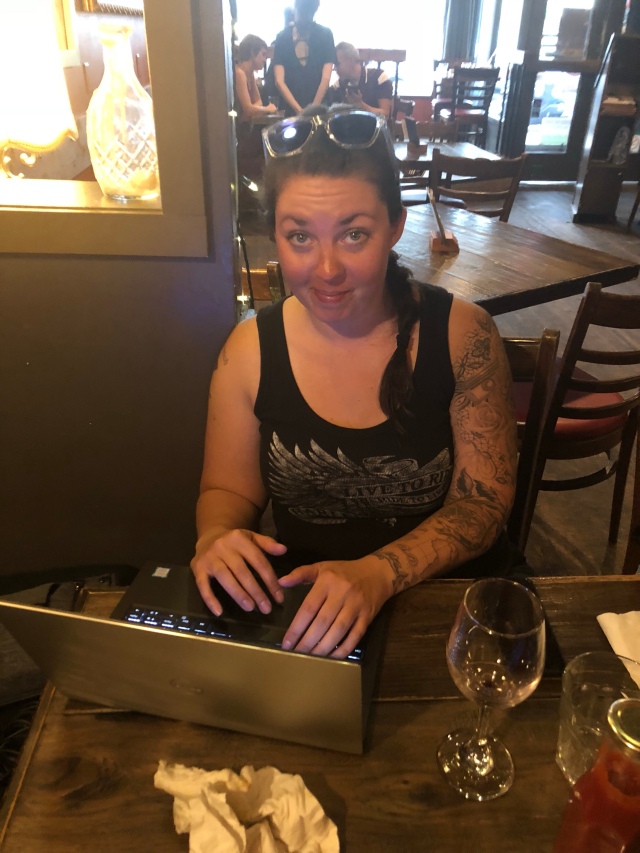 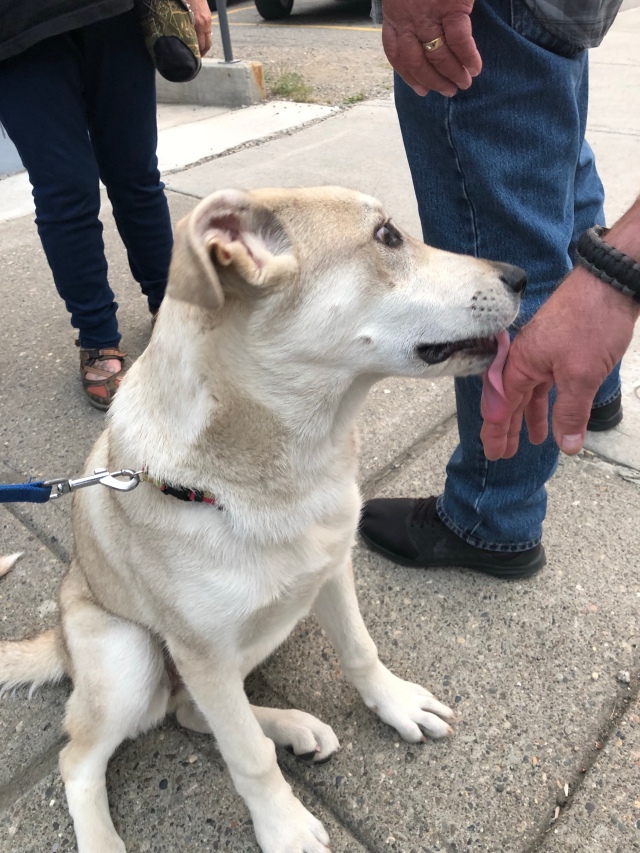