I had a tough time sleeping last night, and was awake around 4am to watch and listen to the huge lightening and thunder storm. Although as an Alaskan I enjoy them, I was not thrilled about the idea of riding in it today. When we woke up around 8am Fred texted me to set a time and a route. He suggested we go north through a small town called Florence then over to Lake City and then down to La Crosse. It was pretty much the same route I was thinking would be good and according to the radar north was going to have less rain. We agreed to head out at 9am, and as we were getting the bikes loaded up it really started to rain.

When I was in Billings, I sent home my awesome nylon, waterproof riding pants. Total fail. So, I had my chaps on and my rain jacket over my leather jacket. I had also sent home the only thick gloves, my heated gloves home. So, I only had my thin little leather gloves that are about 16 years old! We rode through some rough rain for about 20 miles then it lightened up. I had my full face on, but the visor is tinted and kept fogging up, so I had to ride with it open. In hind sight, I should have put on my night riding glasses, but I didn’t think about it so I was getting soaked.

We made it about 100 miles and my fingers were almost completely numb. We stopped and got gas, coffee and thawed out a bit. My left glove dyed my hand black and they were so soaked I wasn’t sure I would be able to get hem on. While I was in the gas station, they had a food bar, I asked for some rubber gloves like they use for food prep. They gave me a couple of small blue gloves which are a quick fix for freezing hands and wet gloves. I was going to wear them as a liner. I asked Sarah if she wanted some but she said her gloves were ok. Then she offered me these big thick gloves that looked like trike winter weather gloves. I gratefully accepted them and put the blue latex gloves in my saddle bag for the rest of my trip.

We were all warmed up and Fred and I had all our gear on and Sarah was still sitting on her bike on her phone. I finally honked at her and got her to get a move on.

From there we headed to this cute town called Mankato.

While we were riding in there I spotted a cute coffee shop/deco store so I pulled over in a 10 minute parking spot and parked the bikes. Fred and Sarah pointed at the sign, and is said “I don’t care.” I figure we would see someone trying to give us a ticket and just explain we were from AK and move the bikes. 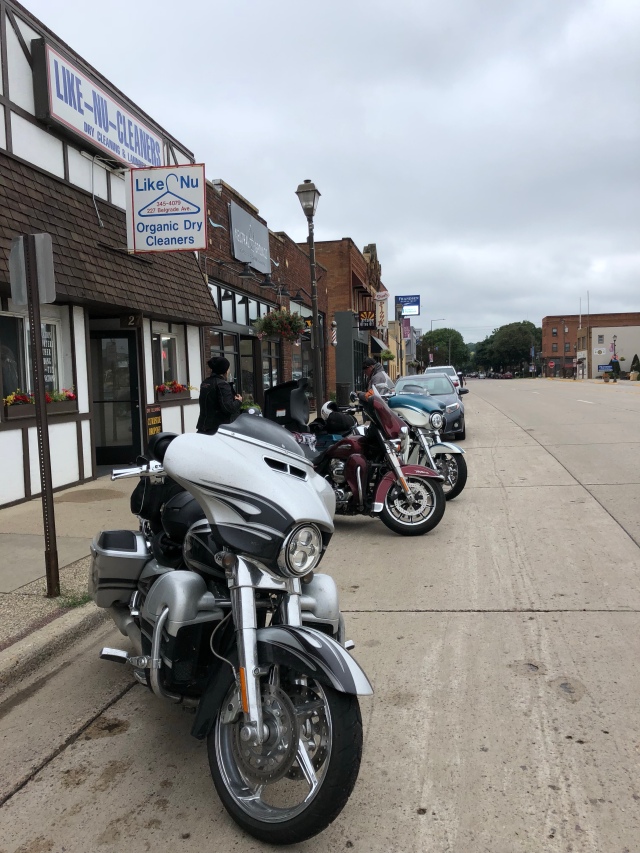 Of course, no one ever came to give us a ticket so we enjoyed some coffee and snacks. While we were there we decided we need to get as many pictures for the blog as possible.

Sarah put on her Spenard Bike Week hat and we had a great idea to take pictures of all of us in our black beanies doing “gangster shit.” 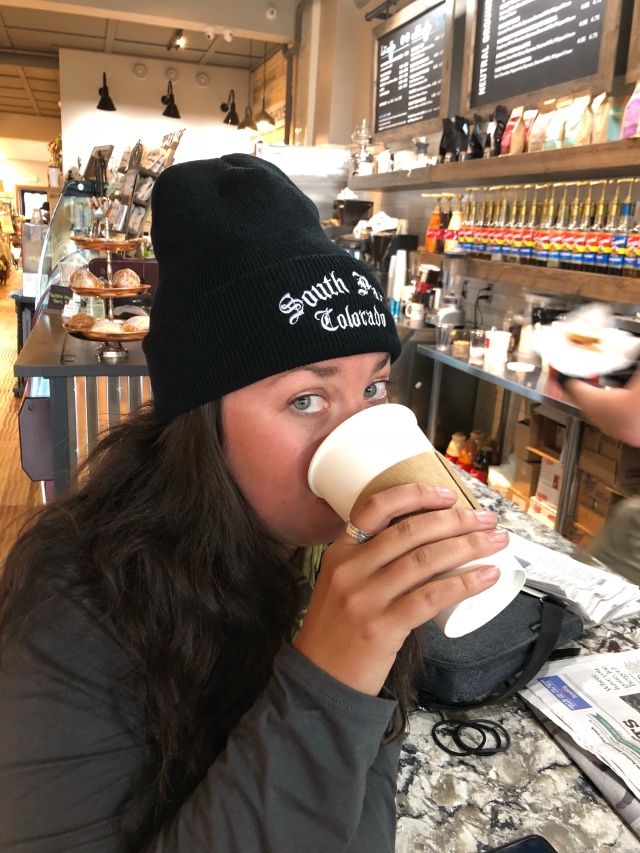 So we found the most “white girl” deco store background we could and took photos with fake gang signs. It was hilarious and the coffee shop patrons also thought it was funny.

The town was adorable and my GPS took us right through the old downtown. I had put “scenic” on my route preferences and to avoid highways, so it was an interesting ride with a lot of turns. From the very beginning all the way to the end the route kept taking us from one rural county road to the next often zig zagging north then east then north etc. The ride was actually really fun and pretty. We rode through some farm land, hills, rocky cliffs, rivers and lakes. It was all full of large trees and super green. After our coffee shop stop we headed south east toward Lake City. When we were about 18 miles from town I stopped at a big gas station to fill up. From there we decided just to ride straight to La Crosse and to the hotel. 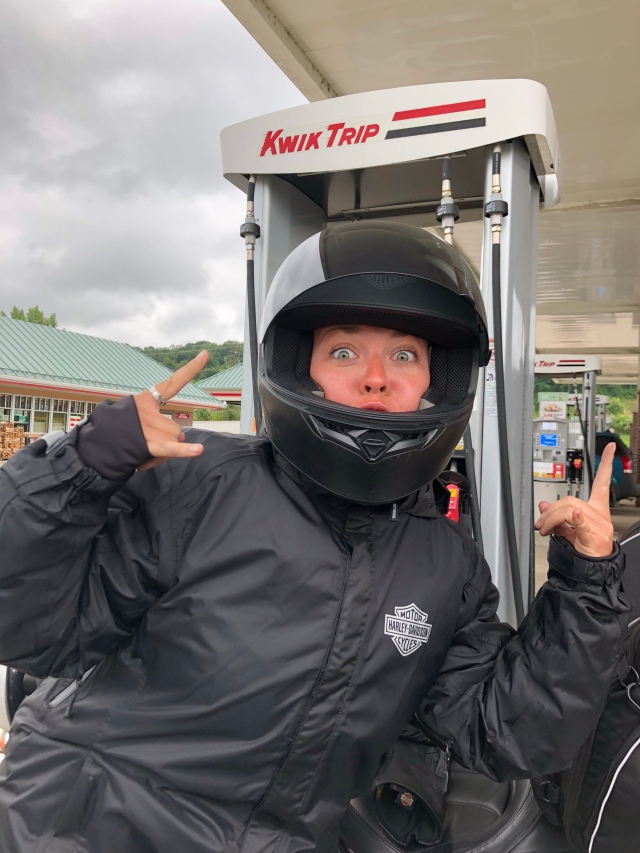 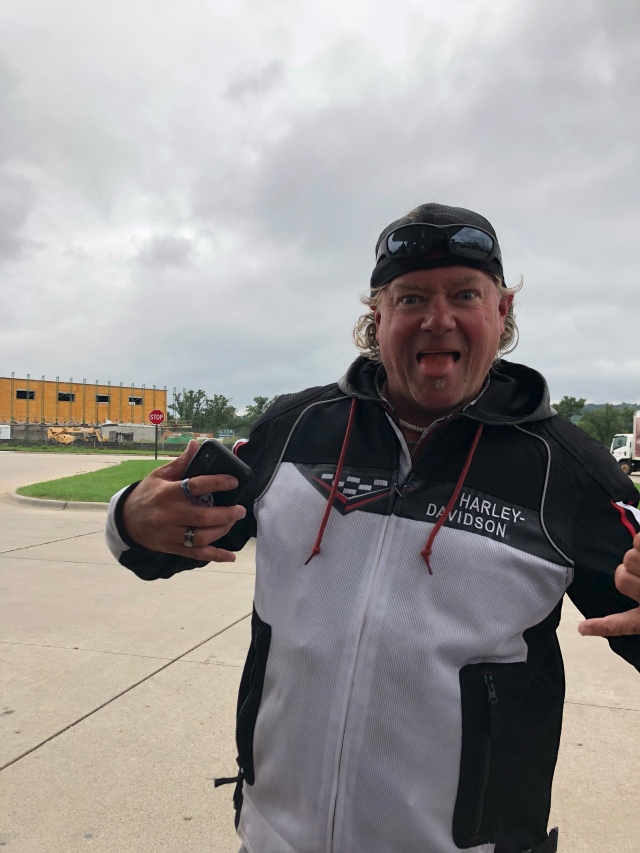 The rest of the ride was equally as beautiful and fun. We were going through a lot of small towns, by the river and some lakes. The speed limit was usually 55 but the three of us were running about 75 most places and having fun passing cars. At one point I was cruising along with Sarah and Fred behind me. I saw the sheriff’s car on the right pulling across our road, but by the time I realized I was doing 75 in the 55 he was pulling out right in front of us, across our lane and heading in the opposite direction. I am not sure if he was doing this on purpose to slow us down or if he just didn’t see us. Either way, I was glad he was going the other direction as I slammed on my brakes and slowed down. He didn’t even tap his brakes and kept on going the other way. We did see several people pulled over on the way, I am just glad it wasn’t us!

This is our last night on the road before we get into Milwaukee. When we arrived at the hotel all the bikes were parked under the overhang, so we parked there as well. Apparently, there might be hail, so the hotel was kind enough to let us park under there.

I was also able to get a room on the first floor so I didn’t have to climb stairs hauling all my shit with a bum knee. After a quick shower we met most of the group in the restaurant and got some food. Tonight, my best friend Christy Revet (I have known her since I was 16 when we both worked at the House of Harley-Davidson). We have pretty much been twins ever since. Tagging along with Christy on the trip down is Levi (Sarah’s boyfriend, sales employee at the shop and cool guy that loves Harley’s). Sarah and I are both stoked to have our other halves here for the rest of the trip. (Other half for me is my best friend…just to be clear…Christy is still available I don’t want to screw up her game). They flew into Milwaukee and picked up a rental car and are heading to meet up with us in La Crosse.

Some of our ladies of Harley are getting crafty with T-shirt’s in the middle of the bar.

Tomorrow we will ride into Milwaukee and get the group to meet up at the H-D dealership before town and then we will all ride in together and go to the H-D Museum to get our group photo.