Last night Christy and Levi showed up while I was sitting on my bike trying to get signal outside to check my emails and get some work done. It was great to have my bestie join me. We promptly discovered that the liquor stores don’t sell liquor or wine after 9pm so we opted for some spiked sparkling water. We hung out by the fire pit and talked Fred into waking back up and coming out to hang out with us for a bit. It was a lot of fun, but we eventually were told by the hotel staff that we had to go to bed…rebels. 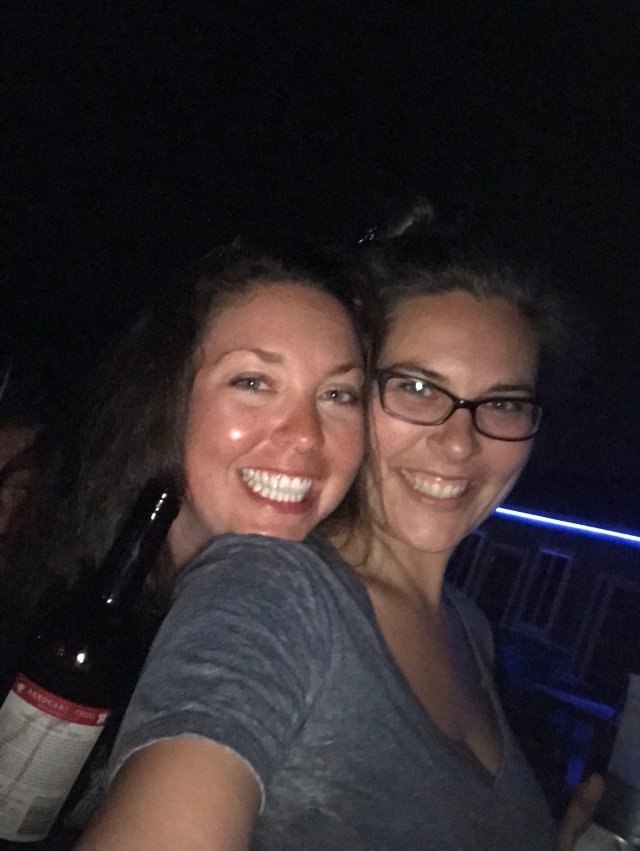 We all got up this morning and got our stuff packed up and ready to hit the road for the final ride before the party. As we were packing Sarah ran over to a thrift shop and hardware store to try to find us some stick on letters to write on our windshields. While she was doing that, Levi and I went to get the breakfast at the hotel. When we walked in, I joked about the fact that I wasn’t wearing shoes…and sure enough they had a sign that said “No Shoes, No Shirt, No Service.” I walked in and the gal stopped me and said, that I couldn’t eat without shoes.

I told her I just wanted coffee and she tried to stop me to tell me “He can get you coffee and bring it to you” in her Russian accent. I looked at her and said “No, I will get my own coffee and then I will leave. I paid for my room and I will get coffee.” I might have been a little hung over and grumpy but I also was just cracking up at the ridiculous behavior. I got my coffee and left. Levi was trying to get breakfast and leave, and she followed him around telling him he had to eat the food in the dining area and could not take it to go, so he finally snuck out with an english muffin.

Sarah got back and Fred waited for us, so it was us 3 again and Levi and Christy followed in the car, which was great so I could put all my gear in there and have a lighter bike. We agreed to just take the freeway so we could meet the group at Wisconsin Harley-Davidson so we could go to the museum as a group to get a photo. Everyone was gone except for us, so we hit the freeway and hauled some @$$ until we hit the freeway closure. It was pretty funny, the exit before the closure a car pulled over in front of us and kept waving us to exit, but I thought “Surely he isn’t signaling us and I am not gonna follow a perfect stranger…” well we should have followed him. He was trying to save us from almost an hour on the freeway trying to exit all of the vehicles.

Once we finally made the exit, we stopped for gas. Christy and Levi were behind us so they pulled into the gas station as well. We stocked up on a lot of water…a lot of water… and I got a pickle and some almonds. You have to love gas station food. And from there we followed the mass of people on this side road since the freeway was closed. Eventually we came to a spot in the road that was completely backed up. As we slowly rolled along I waved Christy forward in the car and she fed me pretzels and water through the window while I rode down the road. While I was slowly rolling along I realized my speaker or amp had blown and I had a distinct rattle and weird thump from the bass. Bummer! I guess I will have them look at that when I get my 20K in the next week. I changed my GPS settings to send us on “avoid highway” to find an alternate route and it told me to turn right on “County Road Z.” So, after sitting forever in this traffic we could have rode the shoulder and passed all the traffic to turn right on this road. Oh well, you live and learn.

The county road was great and hardly had anyone on it. We hauled @$$ as much as we could with the rough shape of the pavement and all the towns we rode through. Eventually we came back upon I-39 and I was thinking it might get us to where we were going but my GPS was still on avoid highway. By the time I got it caught up to stop avoiding highways, it had already sent me past the intersection. It was ok, because we got to ride through a beautiful small town and see a little more scenery before we got on the freeway. Actually, the whole ride on the backroads was great. Big trees, hills and curves. Can’t complain. I texted Barry while we were stuck in the traffic and told him we were going to be later than 1pm. We got on the freeway and hammered down tracking about 85 to 90 the whole way to Wisconsin H-D. When we arrived, most of our group was there but Barry and a few others were not.

While we waited for the group Sarah and I decorated our windshields so people could see where we came from Her bike said “Heard there was a party – rode from Alaska 4K+ Miles” which was great. Mine just said “Alaska to Milwaukee.” Once we got most of the group assimilated we took a photo of all of us in front of the Wisconsin HD Sign. From that point we decided to head to Veteran’s Park to check out the welcome part from HOG and HD. We parked in the grass and walked in. There has been a bit of rain so there was a lot of mud and muck to walk through. 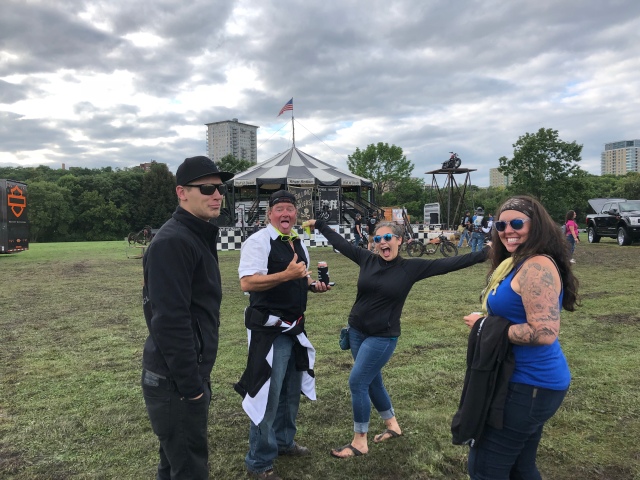 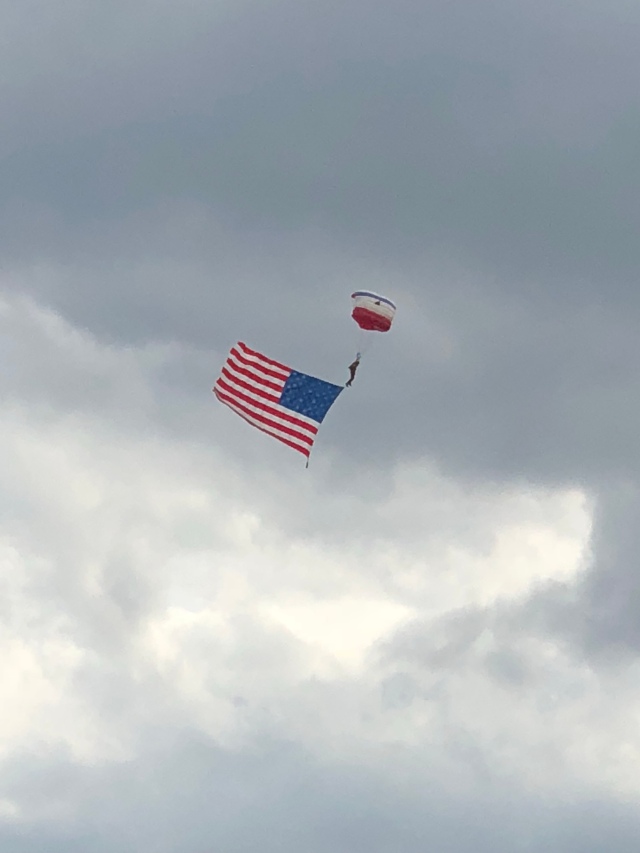 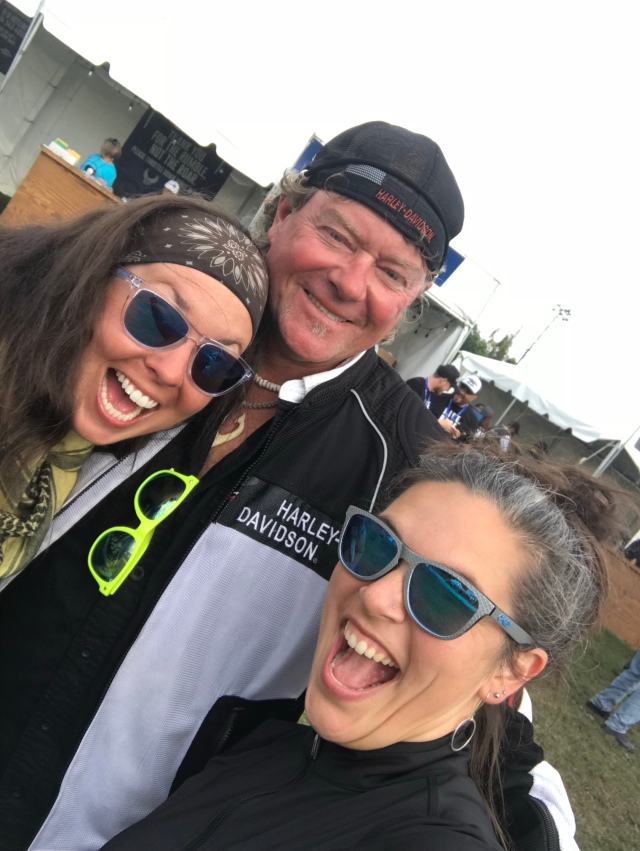 We hung out, listened to some good music and ate some food. We checked out the Ferris wheel and did some live videos from there and it was fun.

After awhile, I asked the group if they would be ok with going to my friend Anne Marie and Tammy’s restaurant called Moxie. Everyone was down to go, so Fred, Christy, Sarah, Levi and I rode to Moxie. I was super excited to see Ann Marie and Tammy and we got to hang out with them for a bit.

They have Gloria Struck coming to the restaurant tomorrow to do a book signing. If you don’t know who she is, you should GTS. I shared it with the group, so our plan is to go tomorrow after we check out the factory. 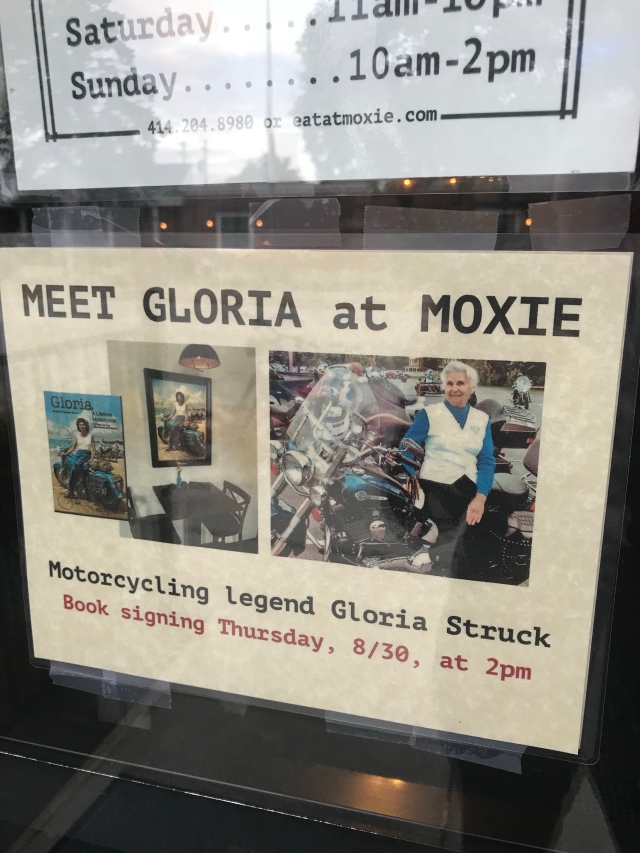 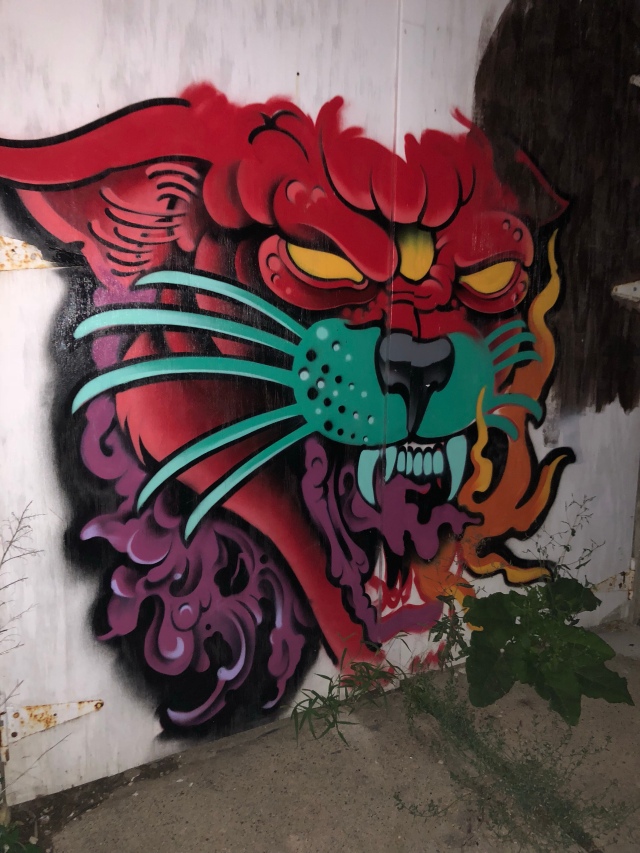 Milwaukee Graffiti/Mural outside our Airbnb

I may not blog the next couple days if they go long and I don’t have time, but we will be in Milwaukee until the 3rd. I will continue blogging from there for sure!